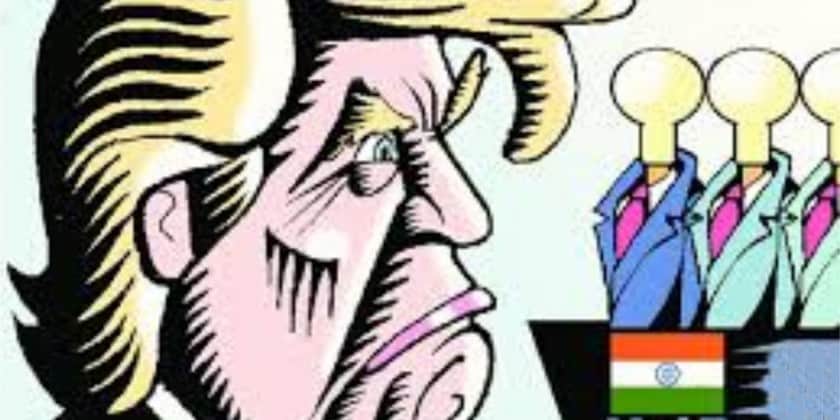 During our freedom struggle, there used to be an old saying (coined by Gokhale): “What Bengal thinks today, India thinks tomorrow”.

Alas, Bengal has today slipped much from the high pedestal of yesteryears. Today the phrase more in vogue is “What happens in the US today, will have its impact the whole of next year in India”.

One such instance is the recent decision of President Trump to discontinue with H1B visas and other work permits for foreign citizens and other expectant immigrants.

Seeing the amount of turmoil this decision has created on TV studios and social media, I have analyzed and found the 5 great impacts this will have on India.

Jobs in the IT sector and banking sector in India will reduce drastically. Or in other words, there will be lesser jobs in IT companies; worse, many existing employees will lose their jobs.

Reason: Not difficult to fathom. Most of those Indians in the US who will lose their H1B visas are employed in the IT sector. Now these people will come back to India, and knowing our IT companies’ fascination with any ‘Returned from US’ tag, they will hog most of the jobs. And resident Indians, consequently, will become the bigger victim of Donald Trump’s whims and fancies.

Dowry amounts in Telangana, Andhra, Tamil (and, and , and ,,,read all other states, especially those in North India) will reduce drastically. Looking at our Indian female dream and fascination to tie the knots with American yuppies and our Indian parents craze to have ‘phoren damaads’, dowries asked for and given of NRIs from these states have skyrocketed. Trump, might have inadvertently given some solace to all those ‘would be sasurs’ who were about to become paupers in marrying their daughters off.

The population of states like Punjab and Gujarat will increase manifold suddenly. Currently, at least 1/3rd of the citizens of these states migrate to the US. Just go to the US consulates in Delhi and Mumbai and you will find the long queues of mundas and kudis from Punjab and Chhokras and chhokris from Gujarat and you will get the answer. Suddenly, our next census will see additions of more Singhs and Patels in our population. And Trump’s decision will be more of a headache for Modi and his government.

Americans will be deprived of their regular doses of chicken tikkas, rogan joshes, lamb vindaloos and even theplas, dhoklas and utthapams and rasams. After all Indian restaurants constitute nearly 90% of the restaurant trade in US and Indians are the owners of these food joints. Considering the popularity of Indian dishes in the US, I wonder how come most Americans have still not revolted against Trump’s decision. After all “Indian khana is now our American birthright”.

What will happen to our fake accent brigade in India? One or two stays in US, and suddenly they acquire a nasal Yankee tone. The dudes and the babes will start wearing cool shades; lengths of their dresses will start becoming progressively shorter; hot pants will become the norm and they will start having tattoos and piercings at all odd places (including some really nether regions of the body). Trump’s unilateral decision in one swipe will completely eradicate these phoney Indo-Americans.

In2IT Technologies announces the appointment of Gursharan Saggu (GS) as CEO for America. In his…

Despite criticism from a range of education officials and academic groups, U.S. government’s Office of…