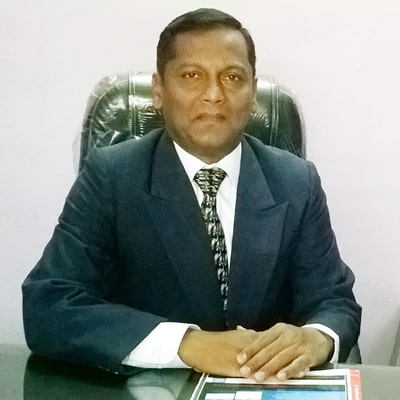 An IT professional for last 23 years Soubhagya Routray, Owner of Baftek Infosys Pvt ltd, was born in Sambalpur and brought up in Jagatsinghpur of Odisha. From a common lab instructor to well known face in IT sector, the journey has been crest and trough for him. He has completed his computer engineering from Pune University and pursued MBA in sales marketing from Kalinga University, Chattisgarh.

Being a meritorious student he got a small job in the university and that kick started his career days. “I started my career as a lab instructor in our computer lab under ‘Earn & Learn’ scheme given to the meritorious students in the Padmashree Vikhe Patil Deemed University in my student career. After completing my studies, I worked as a sales co-ordinator looking after different IT projects in Baftek computers ltd., Pune. As, I was a new comer in the industry, I didn’t know much about the market scenario but, due to my hard work and dedication, I crossed all the hurdles. This exposure helped me a lot in my growth in my career.” Says Soubhagya Routray.

After doing certain jobs Routray started his own venture Baftek Infosys Pvt Ltd in Bhubaneshwar in 1993 with mere amount of Rs. 80,000. “I started my business with an investment of Rs. 80,000 which was withdrawn from GPF by my parents. Due to my past experience in Pune, I drove the business smoothly. The business always faces ups and downs which depend upon the fund management. Sometimes the block in the payments in different places, it became very difficult to manage.” Said Soubhagya.

“I was the first one to deal with the IT and imaging products of SONY in the state in 1995. In 2002, I was the distributor of PCS products all around the state. Now, we have switched over to IT Solution based turnkey projects and e-Governance projects in Odisha and West Bengal.” He added.

Got Muse from friends

Sincerity, dedication, hardwork and commitment, good relationship and service to the customers are the factors which contributed in Soubhagya career and success. But his early muse was his friends who inspired him. “I have been inspired by some of my friends working in the IT sector while I was studying in Pune. I had a very keen interest in business and always wanted to be independent. And then, I even had a motto to employ people and start my own business other than working for someone else.” He said.

The real support system is his family they are always with him, as he speaks. “I have very supportive parents. If they had not supported me then, I would not have been here as you are seeing me today. And as per the saying, behind every successful man, there is a woman, my wife has always been there by my side, being my support system.” He further added smiling.

Soubhagya have many feathers in his cap. Managing various responsibilities, he is one of the founder member of IT association of Orissa and recently got the Presidentship in the very association. Also Soubhagya Officiating as a President of Old Boys Association of S.K. Academy, Jagatsinghpur from 2015 as well he is President of Old Boys Engineering Association of Padmashri Vikhe Patil Deemed University, Pune from 2012. Soubhagya is also on Advisory body of Ministry of Non-Conventional Energy Sources (MNES), Govt. of India since 2003.

On social front, he is a secretary of “Shantidham Foundation” since 2004 for Child Education, Settlement and funding for orphans and old age people in proper place in Odisha State, Plantation in remote hilly area and protect animals.

He has been awarded with the prestigious Excellence Award by PCS Industries Ltd. for Eastern Region on the year 2001 – 2002 at Goa. Also he got Best IT & Organized Man award in Kalahandi Utsav- 2001 in January by RDC. For the year 2002 – 2003 IDCO (the Govt. of Orissa undertaking of repute) awarded him as the Man of the Event Award.

“I am in the IT industry since last 23 years. I have seen many ups and downs being part of the industry. The young entrepreneurs have their own unique ideas and its disappointing that due to the generation gap there is a difference in our ideologies and vision to see the world.” He said.

“I would advice them to see the present market scenario properly and deal with the customers wisely. They should have an absolute idea and knowledge about the products to sustain in the industry. He should also have technical knowledge, not just memorize the theory. He should update himself time to time to tackle the problems in the industry and should be committed to the people for service support.” He adviced.

He belong to a non-business class family where, both his parents were govt. servants. His late father was a bank employee and his mother was a headmistress in govt. school. “I belong to a middle class family. My father was a Chief Manager in the SBI, who left us a year ago but I know his blessings are always with me. My mother is a retd. Headmistress, OES-II. We are four siblings. My brother is an administrative officer of govt. of Odisha and both my sisters are happily married. I tied the knot in 1997 and am blessed with two children.”

Soubhagya Routray loves traveling and have a dream to explore the world one day, and he is a big foodie. “I am great foodie. I like Marathi and Gujarati foods but I relish on typical Odia food, specially Poda Pithas, Rassogollas, Kheera Gaja, Chena Poda etc. And yes! How can I forget Lord Jagannath’s Mahaprasad? I love it.” He said cheerily.

“Move Consistently Towards your Goal”-The Success Story Of Basant Mehta

BlueBell Computers recently celebrated their silver jubilee anniversary. From the past 25 years, they have…