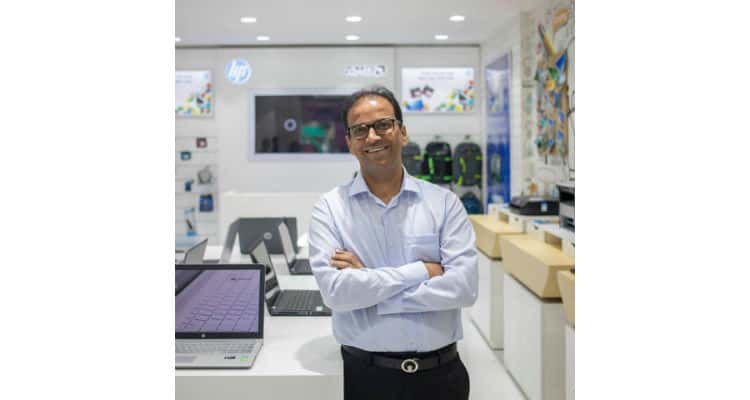 Behind every successful human, there are several unsuccessful and challenging years. It is one’s dream and vision that keeps one going and lets one take everything in stride in those years.

With a long list of hurdles, teachings of elders, believes that professional achievements are not just about awards and accolades has got Apurva Dave, CEO, Innova Systems were he always wanted to be. Thus, start your week by reading this inspiring story –

Like any other child, the early days of Apurva Dave were confusing yet crazy. There was in numerous possibilities and not so stressful pressure of picking the right choices.

He had lots of knowledge at his disposal to learn and was grateful to be able to learn it from his two dearest uncles – Kirit Trivedi (Maternal Uncle) and Kaushik Dave (Paternal Uncle).

“From how to walk and talk to how to keep relations to how to think big, it’s all that I’ve learnt from them. They also taught me that in life and business, there will be a lot of challenges and failures, but one must not stop. I’ve had a lot of setbacks in the business like for instance, we faced a major loss in 1996 as distributors of Godrej telephones and I’ve also been a cancer survivor. Through all these, what kept me going was what they taught me from my early days”.

The Beginning of His Company

After graduation, Apurva took a job as a career. Though, he was well determined on what he wanted to do in life. The idea behind taking the job was to get well acquainted with the corporate world and to understand how things work.

“Like there was a seeming ‘start’, there was never an end or mid-way scenario, there was always a start of something new, like HP Retail Stores, Software division, Automation and Securities and many more. Just like these, in the times to come, we’re going to have a lot of new ventures, so the answer to this question will never be static”.

Innova Systems India provides technology-driven services and has been an undisputed supplier of computer infrastructure and services. Apart from Innova Systems, there have four other businesses, namely- Invenio Retail, Insyspay, Innovation and IRepair.

Invenio Retail has flagship retail stores of HP and Lenovo across the city of Ahmedabad. Insyspay focuses on building efficient and convenient HR and Payroll software for corporates. Innovation is a business focusing on ‘Internet of Things’ where we provide automation and securities infrastructure and solutions for residence and industries. IRepair is an exclusive solution provider and service centre for Software and Computer Hardware.

You’re Journey as an Entrepreneur

While pursuing graduation, Dave’s interests were always inclined towards entrepreneurship. While he was working as an employee, the perks of secured salary never superseded his urge to start something of his own. He knew that business was his forte and his efforts would definitely materialize.

“Flood IT Gujarat has been a very special project for me, which we did for spreading IT education in villages of Gujarat. Other than those, we’ve been part of various successful projects. Professional achievements to me necessarily don’t mean awards and accolades, but gestures, like honoring commitments, maintaining cordial relations with stakeholders, meeting client requirement & customer satisfaction, are real professional achievements because these are some benchmarks which matter as far as contemporary business is concerned”.

Apurva has faced a lot of challenges and hurdles in his life. It is a long list. He believes,”they arise each day from various avenues, instead of counting them, it is important to learn from them and find solutions. They are simply like questions in an exam paper, you need to answer them to get marks”.

There has not been a specific success mantra for Dave, as having one mantra sounds cliché to him. His policies over the years have been influenced by the values of his family and senior personalities of the industry. These policies include being loyal and honouring commitments in the personal and professional spheres of life.

“A thing, which my grandfather told me when I was to start my business was “If your hand is paralyzed, cut it.” This won’t make sense today when the medical science has progressed so much but in business, it means that one must shut loss-making ventures and focus on what is profitable. Also, my father has inculcated a lot of values in me which at times seem growth hindering in business but have proven to be very beneficial in the long run”.

Young entrepreneurs have grown up to be extremely enterprising. They have the ability to set their priorities right and also to think smart.

“I’d advise them to read as much as they can, it will help them to learn a lot and will also improve their thought process. It is also important for them to maintain a consistent focus towards their work which will eventually help them develop new ideas and achieve milestones in life. Also, I’ll advise them to learn to follow rules and develop policies that refrain them from making and believing in soft commitments from OEM’s and customers”.

I love spending time with my family and meeting new people. I feel that helps me learn a lot of new things and I try to relish every leisure activity which adds happiness such as Aerobics, Dancing, Yoga, Swimming etc.

Professionally, we plan to deep dive and expand in all the verticals of Innova Systems which are, Invenio Retail, Insyspay, Innovation and IRepair in terms of coverage, technicality and customer base.

Apart from that, I have a strong desire to acquaint parts of India with digital technology so that the life of people becomes easier and the children can afford to think big. Also, we are currently working on the mechanism through which we can penetrate medical and educational technology in the under-developed areas of Gujarat.

In the 23 years of existence, we have acquired two companies, for software and automation which equipped us with necessary technical and geographical expansion. Similarly, in the years to come, we plan to bring more resources to the organization which can help us grow stronger and efficient.

According to me, Health and Family are the most important components of personal life and henceforth, I focus on health, wealth and family.

Why IoT will Rise in Demand in 2021 Across Sectors

The year 2020 has seen rapid growth of digital transformation, and with increased connectivity, 5G…