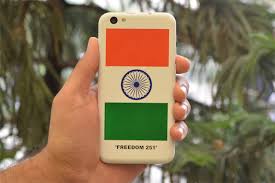 Noida-based Ringing Bells, which has promised to sell smartphones for Rs 251 a piece, has been in news from past two weeks now. It would not be wrong to mention that it has reached out to the nerve and understood well about the Indian people mentality. Bringing the chepest smartphone in the market Ringing bells has made a pitty joke in the telecommunicatio industry.

Speaking about the make-in-India project by our honorable Prime Minister Narendra Modi, an effort Mohit Goel, owner, Ringing bells has made a strategic plan of Rs251 to have Modi Ji’s eye on it. But coming back to reality its hard to understand a fact that how is it possible for a mobile maker to afford all the ware parts of the handset and make the smartphone available at such a cheaper amount of Rs.251, when you hear that parts like; screenguard, back-cover, SD card, Charger is way costly then the handset it self.

The company has been in news about the money they are offering the handset and also their are many other aspects where ringing bells is making news from the past two week. The recent update about the company is that the company is refunding money to customers due to negative speculation around its claim.

During the course of news coverage when DQ Channels approached Kuldeep Gupta, President, Noida Mobile Trader Association he said, “It seems it is a joke which Ringing Bells are spreading it aloud. Speaking on the making of the mobile he said, a single handset comprises of a mixture of 250 parts and how can one imagine of making a phone for Rs.251, It seems illogical.”

Kanpur Mobile Association, President, Dharmendra Gupta showed concern on the same he added, “The lower segment mobile industry will face disturbance, because of an illogical market strategy by Ringing Bells who is pulling a product who’s production is impossible. Speaking on this Dharmendra mentioned that the association will be holding a protest regarding the same and will ask the government to answer it back.

Congress MP Pramod Tiwari in Rajya Sabha strongly objected alleging that ‘Freedom 251’ smartphone scheme was a “fraud”, “I am making a definite allegation. This government is going to do a big scam. This is going to be the biggest scam of the millennium during the rule of BJP.”

He said six crore bookings have already been made for the phone and even at the rate of Rs. 251 each, the mobile company must have collected hundreds of crores of rupees.

Gopal Pansari, Director at Savera Marketing Agency Pvt Ltd said, “The Ringing Bell is growing up for the launch of affordable smartphone at the price tag of just Rs. 251, the price of this smartphone is something which kills Telecom Market and in this price tag we won’t be able to get a good cover for our smartphones but here we are getting a full fledge working smartphone with very decent specs. From news and other media sources we came to know that company is just 5-6 months ,the domain of this smartphone is just registered a month back they haven’t setup any plant yet and they are saying is that they will setup plant in May and will deliver smartphone to users by June.

Another thing which company has said at launch event of this smartphone is not subsidized by government, it’s highly impossible to make smartphone at this price tag without government’s help. ICA has also questioned how this company can make smartphone at this price as its hardware will cost minimum Rs.2500.One more thing about this Ringing Bell Company is that they haven’t got necessary certifications from government like BIS and some other, without which company will not be able to do business in India.

At this time we would like to wait and watch for next few days or weeks how and what this company is going to do, if they really able to make smartphone at Rs. 251 or just $4 then it will put India at new level in world, we hope company will be able to complete its promise and set a new standard for other and will not disappear from market, my best wishes are with them.”

Though thier is one such person who spoke with a positive scope to see Ringing Bells being on its words, speaking in support of the move, Urvesh Goel, Founder & CEO, SyberPlace, said, “Industrial revolution made cars affordable, IBM brought computers to our homes, and internet enabled the democratization of knowledge. Given how smartphones are driving the digital lifestyle and the economy today, smart businesses should be distributing smartphones for free. This move by Ringing Bells will make smartphones available to every Indian. INR 251 is a very fair price for a smartphone, and I admire Mohit and the team for bringing about this disruption.”

Speculations about the no-infrastructure of the company, Ringing Bells said that the company would refund the online payments for some 30,000 orders that poured in on the first pre-booking date (after which the company’s website crashed). The mode of payment now will be only cash on delivery. The Goels hope to begin deliveries of Freedom 251 by April, and keep at it till the end of June.

Keeping the Goels and their dream unlikely company is a 65-year-old astrophysicist.

Reminding about what Ringing Bells promise that it will offer a smartphone with a 4-inch display, 3.2 megapixel camera and 8 gigabytes of memory for less than $4. The $33 smartphones powered by Mozilla Corp.’s Firefox operating system have a 3.5 inch display, 2 megapixel camera and 256 megabytes of storage, this all seems to be a dream but they are not alone to blame we have the Indian population who supported the fraud with an open arms.

Sarita Pansari along with her husband Gopal, has brought up Savera Digital to what is today –…

The nation’s government embarked on its tax reform in 70 years since independence, implementing the…