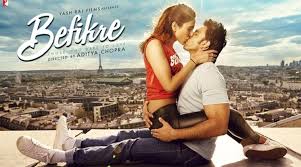 Befikre is one time fun film to watch. Singh, as we all know, is a delightful bundle of energy and an absolute charmer. On the other side, Kapoor is not a conventional pretty face, but like him she too has an arresting presence that makes her extremely attractive.

An insensitive dare involving begging and a fleeting rape joke from Dharam require a separate – long – discussion. Set those aside, and his shenanigans are by and large amusing. The duo also play off each other well.

I scrutinized the entire end credits but could not find a mention of Kapoor’s fitness instructor and dance teacher. During an extended dance sequence between Shyra and Dharam, at one point she faces him with both legs wrapped around his waist and bends her torso backwards dipping her head deep towards the ground, then raises herself up ramrod straight again, her legs still around his waist, without any assistance from him, purely on the strength of her abs. If that was not camera trickery or a product of special effects, here’s an aside to salaam you for your muscle power.

I feel that both characters could have been sculpted better especially Vaani Kapoor’s. Initially, she is shown as the powerful liberated strong self-willed woman living life on her own terms but all that ends in the last 15 minutes to give the film a Bollywood ending.

Speaking of Bollywood endings this film was sold as path breaking never before kind of romance, Befikre with 30 plus kisses and a whirlwind romance no holds barred. In the last few minutes, the twist towards fitting in with the Bollywood film begins.

There are many negative feedbacks and reviews on Social Media that the movie is not meant for the Indian audience as it is vulgar and not a family material. Instead of criticizing the concept of Videshi lifestyle, we should accept what exactly we think and feel that is what we should do.