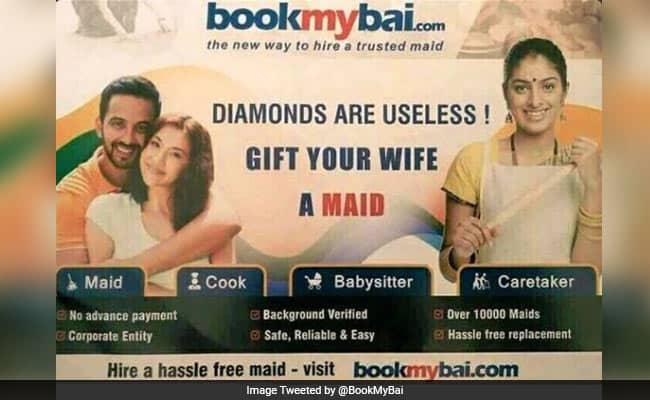 BookMyBai, an online platform where one can find a house-help, has put a blanket ban on Bollywood celebrities, after getting multiple complaints of gross misconduct.

In a blog post, one of the site’s founder, Anupam Sinhal, wrote about 5 Bollywood celebrities (they haven’t been named), mistreated the house-helps, after hiring them through Book My Bai.

The company’s CEO said that he agreed it’s unfair to generalise but pointed out that out of all the people who availed the site’s service, Bollywood celebs were the only lot that treated the maids badly.

A celebrity even refused to relieve her house-help despite learning that he (the house-help) had to go to his home-town to perform the last rites of his mother.

Another one refused to cough up the money Book My Bai charges as their fee, threatening to go to the ‘Crime Branch.’

One celebrity even physically abused a maid, who eventually ran off to her village, never to come back.

Here are some of the disturbing allegations of mistreatment:

“Celebrity 1” Mr Sinhal claims did not allow her domestic help to travel to Bihar to perform his mother’s last rites. The reason? She reportedly wanted a replacement before allowing him to leave. “I have no words to the extent of disgust I now have for this lady,” Mr Sinhal writes.

He adds that the celebrity in question also threatened to post negative reviews of BookMyBai to her 4 lakh Twitter followers.

“Celebrity 4” reportedly threatened legal action against BookMyBai.com after her domestic help fled. Mr Sinhal claims that was due to the “verbal and physical abuse (that) was a part of her daily routine.”

“Celebrity 5” refused to pay BookMyBai’s service charge of Rs. 15,000. “Initially when we were calling her for our payment, she stopped taking our calls. Later she flat-out refused to pay and said -“jo karna hai karlo!” (Do what you want).”

“All these cases disturb me,” Mr Sinhal writes. “For BookMyBai, the safety and security of our domestic help is the highest priority. We are fine if we do not earn money from a certain employer. The least that we expect is that he/she can treat a person like a human should be treated.”

“I also hope the legal system of this country improves for the better so that these ladies who work as a domestic help feel empowered and do not feel scared to report a case of abuse,” he adds.

Posted by: DQC Bureau
View more posts
Tags:allegations, ban, Bollywood, Book My Bai, celebrities, mistreatment
BookMyBai Has Banned Bollywood Celebs- The reasons will SHOCK you! 0 out of 5 based on 0 ratings. 0 user reviews.
Time to Unlock the Security Levels in Gaming!
Reliance Jio users can get up to 168GB free data

T20 of Bollywood – The Next Billion Dollar Game for India

‘Necessity is the mother of invention’, goes the old adage and this fundamental rule is…

Celebrating the essence of Women on 70mm

By: Kirtika Chander Women on 70mm. Women-centric films in the spirit of International Women’s Day…

I love watching movies, whether it is Bollywood, Hollywood or other world cinema. (I can…