Knowlarity, the leading cloud communications provider across emerging markets, recently organised an event where the future and power of artificial intelligence was discussed, analyzed and evaluated.

With a central theme of ‘Cloud Telephony Re-Imagined: The Transformative Power of A.I. in Communications’, the event saw a participation of the leading industry experts and thought leaders on the issue.

With practical experiences shared by Knowlarity’s CTO Ajay Shrivastava and detailed insights from A.I. architects such as Enterprise Solution Architect at AWS Samir Karande, the event served as an eye-opener for entrepreneurs who were still in two minds about the feasibility of this state-of-the-art technology in present business environment. The Meetup also comprised enriching sessions studying the A.I. phenomenon on various planes such as its transformative role in business communications, Democratizing A.I. and specifically utilizing A.I. from the focal point of customer centricity.

Commenting on the event, Ajay Shrivastava, CTO, Knowlarity said, “The world over, Artificial Intelligence is the latest concept that has become the buzzword of business. While many global companies have already started to successfully implement A.I. for business and brand growth, Indian entrepreneurs are still trying to grasp the enormity of this immensely transformative development. In such a scenario, this Meetup was an absolutely essential and enriching event that left the participants significantly aware and fully prepared to mould the A.I. phenomenon according to the best interests of their respective businesses.” 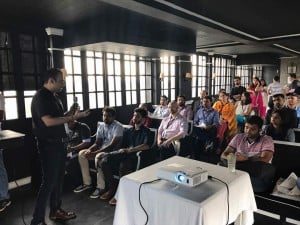 The event saw sessions being led by Ajay Shrivastava, the current CTO of Knowlarity and previously the Head of Technology at Oyo, who helped the company grow its technology team during the phase where the company grew from four to 200 cities.

The panel discussion on A.I. and customer centricity was moderated by Shantanu Mathur, Country Manager, Knowlarity. One of the most awaited sessions of the event was Customer Speak, where customers, the most important cog in the entire business wheel, described their first-hand experiences communicating with A.I. in business interactions.

The business leaders were looking forward to this session as it provided them with significant first-hand data to help determine their future A.I. strategy.