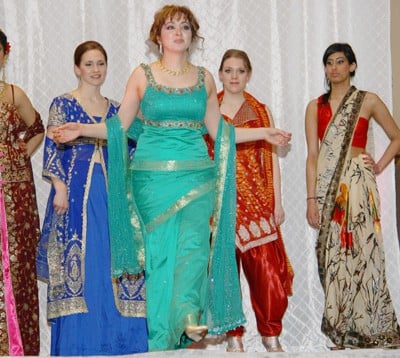 “The idea and dream of South Asians to be in Canada or to make a purchase that is Canadian formulated the start of a new business plan.”

Carline Bangar is a Euro-Canadian designer, married to a Punjabi Indian man and designs dresses that have a mix of South Asian and Western aesthetics. She spoke to Archana Verma of the DQ Channels. 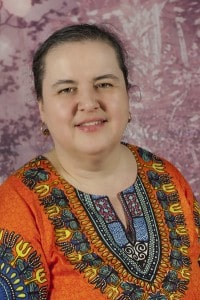 Something about your background, how you came in this profession etc.

I have always been a very creative person from early childhood. I was raised by a very traditional mother and father. From early age girls were taught the skill of being a very good wife and mother. Knowing these skills were compulsory and an asset to real womanhood. Girls need to learn to cook, maintain the home and sew. It was similar that time with boys. They were expected to learn to take the masculine role in the home in order to become good husbands and learn how to become real men. It was the era not long after World War 2. One day I showed my Mom a tear in the dress of my doll and wanted her to fix it. I do not think I was more than four or five years old at the time. She insisted I was going to fix it myself. She threaded the needle and showed me how to do the first stitch then I was expected to complete it which I did. It was not so great but my first time any way. She had always confidence in me and realised I was a gifted child. She would give me things which were ready to be thrown out just to see what I would do with it. I developed a passion for my abilities and wanted to do more. She would always keep old clothing that was tattered in a large kitchen drawer. I would go in there and find fabric I wanted to make clothing for my dolls. I was maybe around ten or so. I would make all kinds of creative clothing for my dolls. It got to a point that she would have a hard time to find the rags she needed to using for cleaning the house. I got an old purse and made shoes for my dolls as well. I also got involved in doll making and other crafts. The passion became set and by the time I was in my teens Mom had stopped sewing my clothes as she was going to work at that point and expected me to further my skill. I was sewing my clothes and was getting real good at it and started to get interested in Asian wear, both Indian and Chinese. It became a new love for me to the point I made this type of clothing for myself and wore it at school and everywhere. I did not care what anyone had to say about it and I know one day this was to become part of western fashion. My family thought that I was losing my identity as a Canadian and trying to become a person of another culture. No matter how hard I explained to them my purpose, they would not hear of it. At the time I was sixteen I already was in association of South Asian people. South Asian people became my next passion in my journey of creativity. After I got married I started my own business. It was best for me at the time because I had started a new family and my parents did not agree for me to go out working at this time with small children to care for.

How did you learn to stitch and design South Asian dresses? 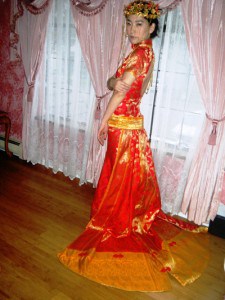 Since I knew how to sew I took on the challenge of becoming a tailor. At that time I did not even know how to cut and sew Punjabi suits or any type of pattern drafting. I could sew from paper patterns well. I never allowed any barriers to get in my way and determined to meet and beat any obstacles always. It was one of the disciplines I learned from my parents. In order to perfect and understand how to sew East Indian clothing well, I had asked one of my husband’s relatives if I could borrow her note book she had from sewing college which she did. I experimented to sew a Punjabi suit for myself based on notes and a sample she let me borrow. It wasn’t so bad but over time I got better and more business was coming in. My husband’s family gained confidence in me and had asked me to do their Indian clothing as well which by that time was well done. By observing and listening to comments of those who were of Asian descent mainly from India, I started to formulate new ideas and sketch designs based on Indians living in two worlds being a western culture and an India culture and what they would like to wear in this situation. It was a time when no ready to wear India clothing was available. There was not even internet either for me to research my ideas on.

How did you get into designing Indo-Western dresses? 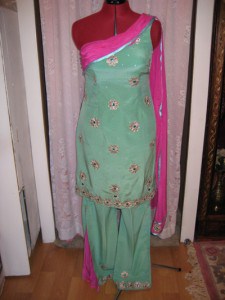 The ideas and responses it stuck, I started to work for clients in the retail sector. I did a lot of networking to get business going my way. One of the things which helped me to get business was my Indo-western designs. There was a demand for Indo-western values which at the time was considered something new and a must have. I was the only one doing it so I had no competition and that time no one could sew outside of the traditional clothing or western clothing. By combing the two it was a hit to the point I was backed for two months in wedding season. As the turn of time things start to change in the Canadian economy and ready to wear became available and brides started to go to Indian to buy their needs or generally the interest in buy ready to wear from India it came to a point which I felt an upgrade was needed. I had visited India on a few occasions which gave me a chance to study the Indian market and see what was the demands and further information I needed at the time.

How did you venture into the Pakistani market?

I had visited Amritsar on a few occasions as well. As I was in Amritsar I was told I was just a step away from entering into Pakistan. I felt a strange pull to Pakistan and badly wanted to go as I was just on the front step of it. I wanted to go with exploring new zones in the world of creativity and art. Every time I would go to Amritsar I felt like I had a strong calling to enter in. I asked my husband but he refused every time. Now I am free of family responsibilities. I have decided to pursue more of my skill and talent to develop a brand for South-Asians based on Canadian values. I developed a good business plan so I would not have to be present in those countries. 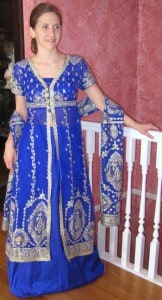 Please explain your affiliate business and the challenges in your way

I learned about affiliate marketing where the one on the top has all the ideas and brain work and those who buy into that all the affiliates who get a percentage of the business they create for the person at the top. So I have considered doing franchising. One of the biggest hurdles is to find people that are truly committed for the long term and are reliable. Money too is an issue but not the biggest one. Since I am experienced with having started my business from zero and worked my way up. To having the right connections and business support is essential. Not being there and trying to get things on board from a bird’s eye view can be a little complicated. But as always I do not look at problems as obstacles,  but challenges to be mastered and resolved.

How has Social Media helped you?

With Social media such as Facebook, I am able to make connections to any interested persons who would like to develop a foreign business of their own, such as in Pakistan or India. I have been responded to with much interest. I don’t use ad campaigns on Facebook. I use only free posting method. This means I have to be on Facebook for a large part of the day and have to engage with my Facebook page a lot, but  like my work and enjoy working from my Facebook Page.

How do you compare South Asian and Canadian markets?

The idea and dream of South Asians to be in Canada or to make a purchase that is Canadian formulated the start of a new business plan. Since the economy has a good setting for a new business start up, such lower expenses due to the rupee’s low value give great opportunity for business start up compared to that in the West where it is next to impossible to start up a business without huge capital. Not only that but due to poor economical situation in Canada and lack of consumer confidence in spending, business is just not what it was in the past. In Asian art of the world this is not a factor. People love to shop and find new things such as foreign clothing and eat from foreign restaurants. In some aspects it is a status symbol and the idea of being up to date with the very latest of the modern world. Being Canadian and with the ideas of Indo- western and Canadian values would give me the chance and recognition I need to stand in a very highly competitive market. To present something to consumers what they never had before in these countries. 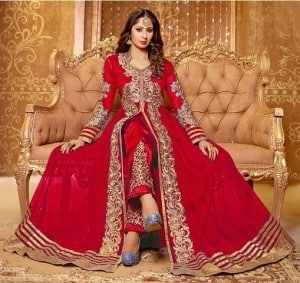 Something about your designing tastes

It is my passion to keep evolving and discovering new way of doing business. Right now if you are not on the international market, you cannot grow sufficiently with such talent and skill. I cater to any client even on the global scale and not just locally. I’m currently working with a client in America for his retail store. I design and tailor his street and club wear and other themes he is working on. I live in a country of much diversity. The people I get are mixed group. I do all sort of clothing depending on the request of the client and for any occasion both men and women. The types of designs I create are favourable to all people from all ethnic origins and receive lot of praises for my work. I never impose on any client my fashion values and just feel my way and listen to what they are looking for and formulate fashion ideas from that. Using social media such as Pinterest,  Twitter, Linkedin, Facebook etc and the online free advertising such as Craigslist I am able to circulate my fashion ideas and tailoring skills to get further business.