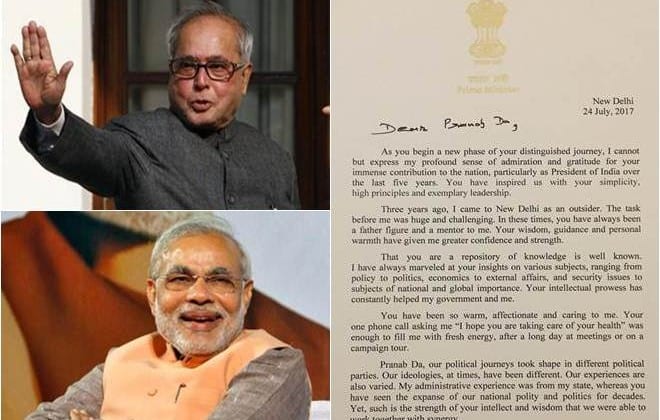 Before leaving Rashtrapati Bhawan on his last day as President of India, Pranab Mukherjee got a farewell surprise. A heart warming letter from Prime Minister of India, Narendra Modi.

Now the farewell letter has gone viral on the twitter saying ‘a letter that touched my heart’.

Here in the letter PM Narendra Modi thanked him for being a father figure and a mentor. He also thanked Pranab Mukherjee for his wisdom, knowledge and his insights on various occasions.

“You have been so warm, affectionate and caring to me. Your one phone call asking me ‘I hope you are taking care of your health’ was enough to fill me with fresh energy, after a long day of meetings or on a campaign tour,” wrote the PM.

Here is the viral tweet of Farewell letter of Pranab Mukherjee.

On my last day in office as the President, I received a letter from PM @narendramodi that touched my heart! Sharing with you all. pic.twitter.com/cAuFnWkbYn

He replied, “Pranab Da, I will always cherish working with you.”

Pranab Da, I will always cherish working with you. @CitiznMukherjee https://t.co/VHOTXzHtlM

Thanks to Social Media…as its good to look at two big political personalities opening up….and setting an example through out the country.

And here comes the retweets and congratulations from other twitter users.

Sri PranabMukherjee proved to be an ideal president with a sterling performance.He will go down in the history as one of the best Presidents pic.twitter.com/7I4Kt6ipOt

RashtrapatiJi, it's been an honour to work with you as your Prime Minister: gracious note from PM to @CitiznMukherjee Pranabda's new handle https://t.co/fxMnpNozEA

The little known side of 2 prominent political personalities. Good of @narendramodi to write it &gracious of @CitiznMukherjee to share it https://t.co/XzNr1f0C2r

A great tribute from @narendramodi to a much admired President of our nation @CitiznMukherjee https://t.co/NIYwynXjid

Excellent camaraderie. Should be honored by naming a New Delhi location – his karma bhoomi after pranab Mukherjee.

Some haters will not even praise Modi for this gd behaviour bcoz they are suffering from bias.#PranabMukherjee da u hve made Bengal proud.

Modi's letter to "father figure" should remain private. It's not right for a serving PM to express emotions this way https://t.co/VLbSj7hAef