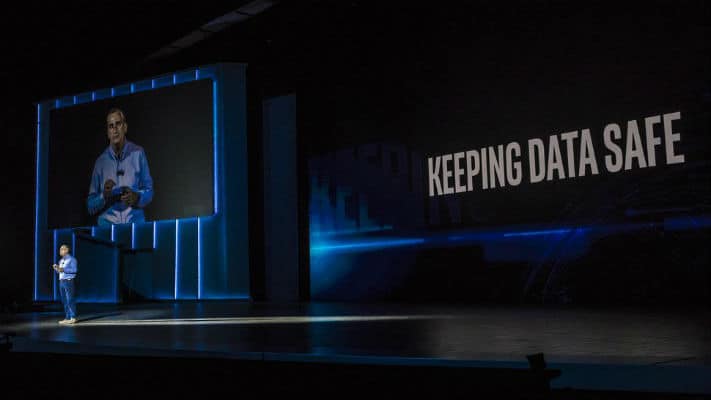 In the beginning keynote for CES 2018, CEO Brian Krzanich, Intel emphasized how data is changing the globe and driving the next great wave of tech innovation. From autonomous driving to artificial intelligence (AI) to virtual reality (VR) and other forms of immersive media.

In a keynote filled with glimpses of future technologies, Krzanich treated the audience to a dazzling variety of data-driven innovations. In autonomous driving, he unveiled Intel’s first autonomous vehicle in its 100-car test fleet; disclosed that BMW*, Nissan*, and Volkswagen* are moving their Mobileye-based mapping design wins to actual deployments; and announced new collaborations with SAIC Motor* and NavInfo* to extend crowdsourced map building to China.

Focused on the future of AI, Krzanich announced a partnership with Ferrari* North America to use Intel’s AI technologies to apply data from the racetrack to enhance the experience for fans and drivers.

In immersive media, he introduced the newly established Intel Studios and announced Paramount Pictures* will be the first major Hollywood studio to explore this technology in tandem with Intel to see where this will lead for the next generation of visual storytelling.

Krzanich’s keynote marked the start of CES for Intel and provided tangible examples for how the company and its partners are unlocking the power of data to transform businesses and our daily lives.

In autonomous driving, Krzanich announced that 2 million vehicles from BMW, Nissan and Volkswagen will use Mobileye Road Experience Management (REM) technology to crowdsource data to build and rapidly update low-cost, scalable high-definition maps throughout this year.

For the China market, Krzanich disclosed two critical partnerships with leading automotive manufacturer SAIC Motor and digital mapping company NavInfo. In addition, SAIC will develop Level 3, 4 and 5 cars in China based on Mobileye technology. Levels are assigned based on capacity for autonomy – a Level 4 vehicle can drive itself almost exclusively without any human interaction, and a Level 5 vehicle can drive itself without human interaction on any road.

Driving Insights with Intel AI and Exploring Technology of Tomorrow

Addressing artificial intelligence, Krzanich showcased how companies are using Intel’s technology to transform their businesses through AI. He announced Intel is partnering with Ferrari North America to bring the power of AI to the Ferrari Challenge North America Series that will take place on six courses in the U.S. this year.

The Ferrari Challenge broadcast will use the processing power of Intel Xeon® Scalable processors and the neonTM framework for deep learning not only to transcode, identify objects and events, and stream the experience to viewers online, but also to mine the resulting data for further insights for drivers and fans.

Looking ahead to the future of computing, Krzanich noted Intel’s promising research into neuromorphic computing, a new type of computing architecture that mimics the way brains observe, learn and understand. Intel’s neuromorphic research prototype chip (“Loihi”) is now fully functioning and will be shared with research partners this year.

Krzanich also announced the next milestone in Intel’s efforts to develop a quantum computing system. Intel shipped its first 49-qubit quantum computing test chip (“Tangle Lake”) to research partner QuTech*. Quantum computing is the ultimate in parallel processing, and Krzanich noted it has the potential to compute at a far greater speed than anything ever achieved before.

Creating a New Wave of VR and Immersive Media

In addition to enabling AI and the autonomous future, Krzanich discussed how data can transform other everyday experiences, such as entertainment and media. He announced the debut of Intel Studios, a newly constructed, state-of-the-art studio dedicated to the production of large-scale, volumetric content – using Intel® True View technology – that will create new forms of visual storytelling with and without VR.

Intel Studios features the world’s largest volumetric video stage and a comprehensive post-production and control facility that will enable companies to create lifelike immersive media experiences like never before. Paramount Pictures is the first major Hollywood studio to explore this technology in tandem with Intel.

In sports, Krzanich announced that Intel will enable the largest scale virtual reality event to date with the Olympic Winter Games PyeongChang 2018 using Intel® True VR technology. Intel, together with the official Rights Holding Broadcasters, will capture a record 30 Olympic events, with both live and video-on-demand content available.

This marks the first-ever live virtual reality broadcast of the Olympic Winter Games and will be available in the U.S. via a forthcoming NBC Sports* VR app. Krzanich also showcased how Intel is helping bring the future of 5G to the Olympics Winter Games to enable other new realistic, immersive and responsive sports and entertainment experiences with VR and 360-degree video.

Intel Announces Its Next Generation Memory and Storage Products

At Intel Labs Day 2020, Intel spotlighted research initiatives across multiple domains where its researchers are striving for…

Intel Works with University of Pennsylvania in Using Privacy-Preserving AI