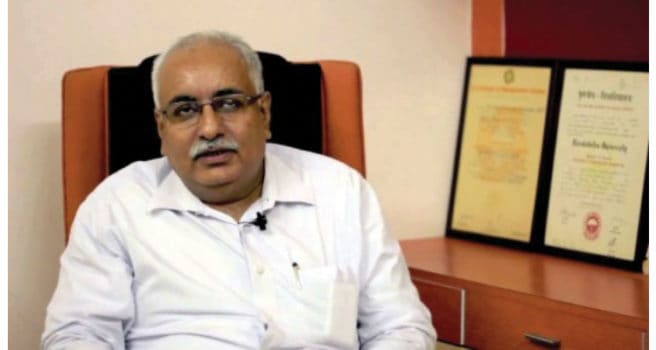 There are only few who work hard and are consistent towards their goals. They are ones who achieve glory.

Harinder Salwan of Tricom Multimedia is one of those few. Let’s learn about his journey of achievement from his mouth.

Harinder Salwan was born in a close-knit family in a hill station called Lonavla, Maharastra. His father was working for the railways at that time; due to which he had to spend the early years of his life in Lonavla and Igatpuri. After 10 years, he moved to Mumbai because of his father’s transfer and further completed his education.

Later, he followed in the footsteps of his father and bagged a seat in the Regional Engineering College Kurukshetra for Electrical engineering course. Though, he graduated as an Electronics & Communication Engineering graduate.

The Beginning Of His Career

After completing his graduation in 1986, Harinder started working as a trainee engineer in Accutrol Systems Pvt Ltd. The company was an agent of Honeywell India when the first Siva PC got introduced. After, which the management assigned more responsibilities, such as of computerization to Salwan.

While working on his new assignments, his interest in computers increased and he joined another company called Indchem Electronics Ltd, the company used to manufacture Computers and Monitors.

It was during these days that Harinder had the realisation that he needs to be more knowledgeable about the software too. For which, he joined Datamatics Consultants for a two-year contract as a developer. He further moved back to lead the computer sales of Kirloskar Electric Limited in Mumbai. He worked there for about 5 years.

When & how of his Entrepreneur Days

With the growth of telecom in 1990, Harinder invested in a PCO during his Datamatics tenure. And it was during the 5 years of working with Kirloskar Electric that the bug of being an entrepreneur bite him. He said, “Looking at some of my classmates in engineering and with the help of a friend, I started two organizations that ventured into the field of Multimedia Hardware and Software. It worked for some leading brands including Creative Labs, Aver, Avision, Macromedia & Adobe which got into a conflict of interest with Kirloskar as they too had moved into that domain in 1993. It was at this time that I had just got married and had to take the plunge into full-time business. It was then Tricom Multimedia was born”.

Further, in 1997 it led to being the Tricom International. The organization of another entity to manage hardware and software activities independently. Salwan added, “We earned a reputation for selling multimedia solutions to create markets such as Interactive CD’s, VCD & DVD encoding, VGA to PAL Conversions, Video Titling and putting multimedia solutions into the day to day use for consumers.

The Beginning of His Company

When talking about the beginning of his company, Harinder stated, “It all started when I was helping some batchmates of engineering who wanted to expand in Western India. I started two organizations – Trident Systems and Trident Communications with a school friend and a local friend. We got a stream of orders from BSE, IRCTC, ONGC, RELIANCE, etc. And then it was the time for me to jump in full time”.

Harinder & his organization has been awarded by Adobe and preceding Macromedia and Corel as a top reseller during the period 1996 -2008. Also later, he took a stand for the industry on the issue of dual taxation and then ISODA was born. He took the legal route and raised questions in the parliament. And finally, in 2012, he managed to get relief for the industry with a notification giving some clarity for businesses.

Harinder also shared the problems and challenges he faced while accomplishing his goals. He added, “There were challenges like friends turning rivals. It was the first phase when your partners becoming your competitors, then there were challenges of geographical reach which led to opening up offices across the country. Today, with the advances in technology and our domain of work we are back to where it all began and managing the needs of the nation from a single location”.

Harinder’s advice to the young generation – “Think independently, do differently and success is waiting for you. Follow the industry and keep your eyes, ears open. Do what your mind and heart tell you”.

“Love to work for social initiatives which helped me create ISODA in 2008 with like-minded IT software professionals. Moved out in 2004 to create a global group of my college Alumni as a section 8 organization called RECNIT Kurukshetra Alumni Association. I recently created the local residents association of our area to cater to over 1 lac plus residents, as an interface between residents and the government for the welfare of the resident community at large covering a part of the Ward number 2 of Mumbai”.

Talking about the future, Salwan stated, “Professionally, I am satisfied with what we have achieved. And looking forward to sustaining and maintain the same and have plans to travel the world soon in the quest of making more friends and relationships globally”.

Show Me The Money- SI’s Multiple Funding Options and Challenges