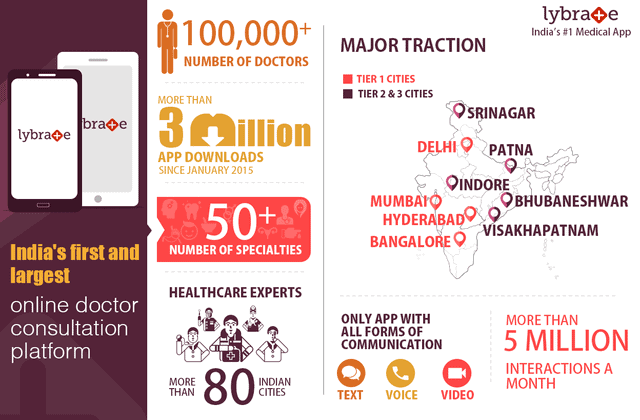 The platform, launched in India in January 2015, now also has more than 100,000 healthcare experts on the platform

Lybrate, doctor online consultation online app, today said its health app has been downloaded over 3 million times on unique devices since the company launched the platform in January 2015.

Lybrate doctor online platform now also has more than 100,000 healthcare experts from varied branches of medicine from across India.

Lybrate, led by Founder and CEO Saurabh Arora, is on its mission to democratize healthcare delivery in India and plug the huge shortage of doctors in the country by multiplying their presence through innovative use of technology in the country.

Lybrate doctor online company, founded in May 2014, has healthcare experts from over 50 specialties and from more than 80 Indian cities. The Lybrate platform has found tremendous support from the doctor community for the ease it provides to them in delivering better care to patients because of seamless communication the app enables to establish from anywhere, anytime.

“The milestones that we are touching could not have been possible without the unflinching support and belief of doctors and users in our platform. These are not mere numbers but reflect the dire need for plugging the gaps that exist in our healthcare system. The growing acceptance of the Lybrate platform not only in metros and big towns, but also in Tier 2 and 3 cities shows that we are moving in the right direction to democratize Indian healthcare,” said Saurabh Arora, who left his Data Scientist job in Facebook, and returned to India to solve the core problem of inaccessibility of doctors that the country grappled with.

Apart from the comfort and convenience the platform provides to users in doing consultations with the doctors and gain easy access to authenticated health information shared by doctors themselves, the feature of anonymity has resulted in greater adoption of the platform, making people to seek opinion from doctors on health issues they were not comfortable asking publicly.

Lybrate doctor online is the only platform in India to encapsulate all forms of communication – text, voice and video – to allow seamless and smooth interaction between doctors and patients. The company’s unique and first-of-its-kind Health Feed encourages users to stay healthy and fit by consuming authentic medical content that is shared by doctors themselves.

“It is heartening to see other platforms too coming with up similar model like ours. This strengthens our belief that a communication platform that enables patients and doctors to talk is the core for solving India’s healthcare problem, which doctor discovery alone can’t achieve in a country like ours with shortage of doctors. It is exciting for us and we would be doing a lot more unique things to fix the real problem of doctor shortage and inaccessibility of healthcare experts in our country,” he said.

Other than Tier 1 cities, the app has been witnessing traction from even smaller cities, including Indore, Patna, Visakhapatnam, Bhubaneshwar and Srinagar. Delhi, Mumbai, Bangalore and Hyderabad are Tier 1 cities from where the platform is witnessing major traction.

Lybrate is India’s number 1 medical app on Google Play Store. More than 5 million interactions a month take place on the platform by way of searches for doctors, health queries sought and patient-doctor communication.

Healthcare: Data Says It All

So far, Lybrate has not made a large presence in smaller towns and rural areas.…