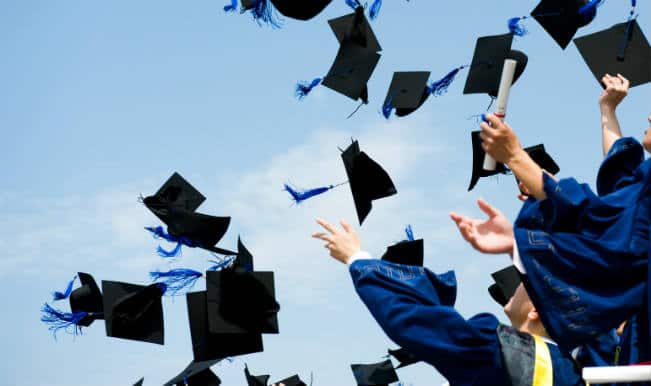 Aspiring Minds’ new study “Automata National Programming Report’, conducted across 500+ colleges and exclusively shared with Dataquest, claims that over 2/3rd could not even write code and so 95% engineers are not employable.

In the backdrop of the slow business and automation challenge, IT services and BPO companies are finding it difficult to keep their existing workforce intact. Thousands of IT professionals are standing on the verge of losing their jobs. It was recently confirmed by a research done by a US-based firm HfS Research which said that India’s IT services industry will lose 6.4 lakh jobs in next five years. It is a whopping number! If these many people are rendered jobless, the foundations of the Indian IT would be terribly shaken. India will lose the chance to stand as a significant player in the global IT market.

For years, Indian IT has focused on all sorts of jobs including the ‘low-skilled.’ Many of the professionals neither have the skills nor the inclination to meet the demands for new-age skills such as artificial intelligence, big data, IoT, robotics, and more.

How can IT industry counter this challenge? What are the ways to put people into the newer roles without handing them the pink slips? But the biggest step towards solving any problem lies in realizing that there is a problem. The problem does not alone lie with the IT companies. Institutions and engineering colleges imparting IT education or B-Tech in computer science are equal partner in the hearsay. IT professionals are the by-product of the education given by colleges and the demand of the IT companies. It has surfaced in a new study ‘Automata National Programming Report’ conducted by Aspiring Minds. The study underlines that “in an ecosystem with a huge IT industry as backdrop and aspirations in Data Science, Artificial Intelligence and Machine Learning, over 95% engineers in India have been found unemployable for software development jobs.” 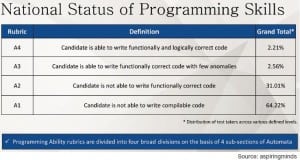 The study claims that for the first time anywhere in the world, a large-scale study of the programming skills based on a simulated test of programming has been done. Over 36,000 engineering students from IT related branches from 500+ colleges took Automata – a Machine Learning based assessment of software development skills – and over 2/3rd couldn’t even write code that compiles.

The study further gives insight in what percent candidates can write maintainable codes with good programming practices and how many implementations are efficient. “The IT industry requires maintainable code so that it is less prone to bug, is readable, reusable and extensible. Time efficient code runs fast. Automata is a tool which grades codes on such parameter automatically. The study finds only 1.4% candidates can write working and efficient codes.

The employability gap – as highlighted in the Automata National Programming skills Report – can be attributed to rote learning based approaches rather than actually writing programs on a computer for different problems. Also, there is a dearth of good teachers for programming, since most good programmers get jobs in industry at good salaries. “Indian IT industry is equal partner in the poor quality of engineers who come out of the colleges. The IT companies do not focus on the coding test. Rather they focus on the aptitude test. In addition, in many of the engineering colleges, teachers who are teaching computer science are the ones who never got jobs in the IT companies. It affects the quality of teaching,” reveals Varun Aggarwal, CTO and Co-Founder, Aspiring Minds, and the brain behind Automata.

The study further warns that low employability of engineers in programming can impede the carefully-built growth story of coding and data science in the Indian IT Industry. It calls for immediate intervention.

“The universities need to look into the problem of lack of programming skills immediately. The school curriculum focusing on MS-Word, Powerpoint, Excel, etc rather teaching programming using elementary languages such as Basic and Logo is also the culprit. The world is moving towards introducing programming to three years old! India needs to catch up,” further adds Aggarwal.

The Aspiring Minds study becomes more relevant when it comes to preparing for the automation challenge. While the basics of computer science should be in place, professionals gradually need to update themselves for the new skills. Alvin Toffler’s words sound more relevant in the current crises who once said, “The illiterate of the 21st century will not be those who cannot read and write but those who cannot learn, unlearn and relearn.” Today’s professionals need to be proactive in learning new skills such as big data, AI, IoT, etc in order to be relevant for the existing and future roles. Sumit Sood, India MD, GlobalLogic rather believes that the challenge is part of the transition phase. He also emphasizes on the need for skill upgradation, “I have been saying this for the last two years now. That what Toffler said in late 70’s or early 80’s ‘learn, unlearn, and re-learn’ has never been more relevant than it is now.”

There are experts who believe that the jobs at the entry level may get hit but would shift. The loss of jobs can be a short-term problem. “Gap between the education system and the industry demand cannot be overnight mitigated. It will, however, be minimized. The job functions will shift from one place to another. In the telecom sector alone, there is a huge scope of employment,” says Lt. Gen SP Kochhar, CEO, Telecom Sector Skill Council.Adapting to the new demands is the key to counter the automation challenge. Yesterday’s skills will not help employees of the future. Jobs are moving to newer functions which need new skills. “Digital Darwinism, survival of the fittest in the digital age, will redefine the industry. And this is not something new. It is something that is been talked about since the 80s,” adds Sood.

The HfS report also states that though “low-skilled” jobs will fall by 30%, “medium-skilled” jobs will increase by 8% and high-skilled jobs will rise by 56%. The IT industry body, NASSCOM, also stresses on this aspect in one of its statements and urge everyone in the ecosystem not to panic.

Experts also believe that Indian IT industry is capable of training its people and preparing them for new roles. “Indian companies are good at training their employees for new challenges. They have proved in the past that they can handle all kinds of challenges,” opines Sunil Jose, MD, Teradata India.

Keeping the study in mind, this is the right to put our house in order and realign our education system with that of the demand from the industry. It is true that it is not utterly possible to 100% match the requirements. But basic things cannot be compromised. As the study underlines, colleges need to put more emphasis on quality education and hiring good teachers. At the same time, IT companies must consider coding test as the base parameter to recruit engineers. This will force colleges to teach students true coding skills. Students with coding skills can be easily trained, retrained and prepared for all kinds of IT skills which are in vogue today or which would crop up tomorrow. 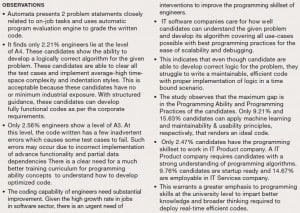 While nobody has really seen what automation and robotics are going to do, the focus on talent increasingly has to be on skill and not scale.