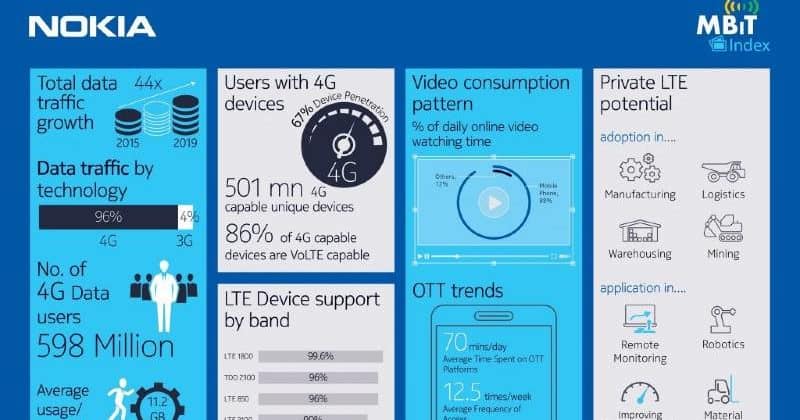 4G constituted 96% of the total data traffic consumed across the country while 3G data traffic registered its highest-ever decline of 30%.

The average monthly data usage per user surpassed 11 GB in December growing 16% annually due to an increase in up-gradation of the 4G network, low data prices, affordable smartphones, and the ever-increasing popularity of videos.

The number of 4G handsets devices grew 1.5x to reach 501 million units due to the availability of a range of feature-rich models and competitive prices.

A growing number of smartphone users, coupled with one of the cheapest mobile data tariffs in the world and the growth in rural internet penetration, have led to the growing popularity of videos in the country.

The video consumption was fueled by the increasing number of Over-the-Top (OTT) platforms with over 30 platforms in India currently, easy availability of regional content, aggressive distribution strategy, and innovations like sachet pricing and mobile-only packs by OTT players.  The average time spent on OTT platforms in India is 70 minutes/day

Nokia MBiT study indicates that several innovative Industry 4.0 use cases will drive the uptake of Private LTE in the country such as remote monitoring in manufacturing and moining, material handling through Augmented Reality in warehouses, logistics, etc. This will advance digital transformation across different business verticals and will pave the way for 5G technology.

Sanjay Malik, Sevior Vice President & Head of India Market, Nokia said : “We believe the migration of subscribers to 4G will continue to drive broadband growth in the country.

The upcoming 4K/8K videos and Industry 4.0 solutions that promises to enhance productivity and bring down expenses for the industries across different verticals, demand ultra high speed and extremely low latency. The Indian telcos will need to consider other connectivity solutions to leverage the new opportunities and to address the growing data consumption.”

Other key findings of the Nokia MBiT study :

India data traffic recorded a growth of 44 times in the last four years, from 2015-19, which is one of the highest in the world.

Broadband penetration is 47%, which is significantly lower than China (95%) and other European nations at around 95-115%

A new agreement has been signed by Etihad Etisalat Co. “Mobily” and Nokia, covering the…

Airtel and Nokia to collaborate on Industry 4.0 applications for enterprises

Bharti Airtel and Nokia have partnered to offer private LTE based Industry 4.0 solution to…