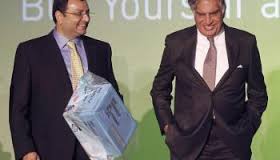 The Business world was shocked when Tata recently ousted Mistry from the chair. Till date, this battle has attained a lot of media attention and daily new information is creating a lot of buzz in the market. Last week, Independent directors from Indian Hotels were in support of Mistry. And on the other hand, Tata sons have also made changes in the role of executives within the group. Besides the ensuing market speculations IT companies also have their views on this controversy.

Meanwhile, British Prime Minister Theresa May won’t meet any executives from Tata Steel Ltd during her two-day trip to India but talks about the future of its British steel operations are still going on, she asserted.

IT partners believe that the dispute could bring about a change of mindset amidst the Indian investors, “Indian investors will think twice in investing such companies who act as family business” said Jaipur IT partner Rupesh Kedia of Computer Supermarket. “Tata is a group of 29 publicly traded companies and may be more which are not publicly traded. Mistry still holds power in many Tata Group companies like Tata Motors, Jaguar, Tata Power, Indian hotels etc. Where as Tata sons does not have even majority of shares in these companies. I believe there will be split of business between Tata sons and Mistry. Tata can not let Mistry out from Tata Group. In my opinion what Tata said Mistry removal was completely necessary for Group is a wrong statement. Even Tata is publicly traded company but Ratan Tata is behaving like it’s a family business.” He added.

“Ratan Tata is a veteran and he must have thought thousand times while taking this strict decision,”Saundrya Routray, President of IT association of Orissa, said on this issue. “However this decision will follow with lots of transformation in management. But, in my opinion, Tata is a public company, working for people of India, so there will no change in its reputation.”

Rana Pratap from Hyderabad IT fraternity said,” we don’t foresee any changes in the market with respect to this decision. TCS is iconic brand in terms of everything as its a big employment platform for youngsters. And in South TCS is a more preferred company. There should not be blame game between the two, while I don’t think Tata investors’ mindset will be affected in any way.

N Chandrasekaran is the new Chairman of Tata Sons

The Board of Directors of Tata Sons, at its meeting appointed N. Chandrasekaran as Executive…

Tata Elxsi has announced its partnership with DiSTI Corporation Florida, USA, the creators of user…