Chetan Shah is one of those few people who chose entrepreneurship over service at a very early age. His entrepreneurship started with Xpress Computers at the age of 19 when he was pursuing his studies in the Sydenham College in Mumbai. During those days, when college students were having enjoyment with the friends in the college campus, Shah was leading one man show in his company by literally selling products door to door.

“I did something that was natural to most Gujaratis – i.e. be an entrepreneur. I worked hard and slowly built Xpress and soon became to be known as one of the best system builders in Mumbai”, recalls Shah.

Being an IT professional, Shah embraced new technology changes at a very early stage. He realized that solution and service business would be the future of IT and hence, created a strong base in the system integration business. Started as a system builder in 1988, Xpress Computers became an Intel Technology Provider Platinum and Microsoft Gold certified Partner in 1995. Metamorphosing into a solution provider by 2000, Xpress turned around its business model to lay the foundation for long term growth.

Setting up one of India’s earliest PC stores online was another big achievement for Shah in the late 1990s. “It allowed us to get a new edge to our marketing and sales efforts and attract more customers”, he recollects.

In 2007, Xpress Computers became one the country’s first solution providers to set up a NOC and offer Remote Managed services through its alliance with N-able, Canada. Xpress started offering 365 days support and many more innovations to push it amongst the premium PC support providers in the industry.

“Xpress has always been a fast moving company, looking ahead of the times and is watching for key customer buying trends. This is a major reason for its survival and growth in the past 2 decades”, says Shah.

Learning from a setback

While Xpress Computers were riding on the path of success, a major setback came during the dotcom burst and doom period from 2000-2003. Customers came to demand a lot more than just plain systems. Xpress changed course and slowly modelled its business as a solutions provider to the SME and education customers. This required extensive trainings, certifications and a complete change in the business. But Shah and his team managed to transform as per the business demands.

Shifting focus to the cloud and setting up Xpresscloud backup solution was a big turning point for Shah and he says that it will continue to drive our business in coming times. Xpresscloud offers unlimited online backup for PCs and Servers along with unbeatable features for just a small subscription fee per month.

Apart from that formation of the National Association for Intel Premier Providers was the strategic decision which helped Xpress Computers and many other Intel Partners to expand business across the country overnight. Shah was also elected to the Board of Advisors at Intel Premier program (APAC). Later, he went on to be the president of the APC board of advisors for Intel. 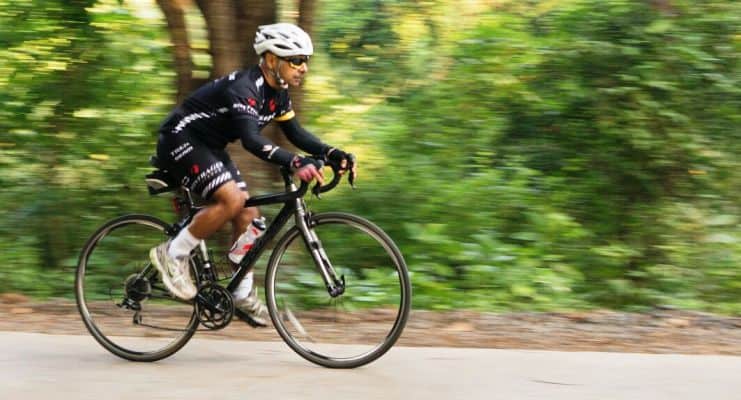 Hard work, Smart work and being open to accept changes are the three pillars of success of Shah. “Work hard, work smart and adapt to change before change happens. This is a golden rule of success”, Shah says.

Shah acknowledges the contribution of his family in his success and also grateful for their support which kept him motivated during tough times. “My family has always been a pillar of strength and happiness for me. My wife has supported me immensely in my journey and been a big part of my professional success”, Shah says.

A passionate cyclist, Shah has recently created a record of cycling to world’s highest motorable pass in Ladakh. He aspires to ride across the regions in the two wheels. “I am a passionate cyclist, riding almost every day. I would like to spend a lot of time on my cycle. I would like to take time off business couple of times a year and ride across other countries and continents”, Shah says.

At the professional front, Shah would like to focus on his key strengths, build  on expertise, focus on emerging technologies and  be prepared to change course.

Be it the Indian politicians or our bollywood celebs, Social media has become the new…

IT “SCHEMES” WHAT’S IN ‘IT’ FOR VENDORS & PARTNERS?