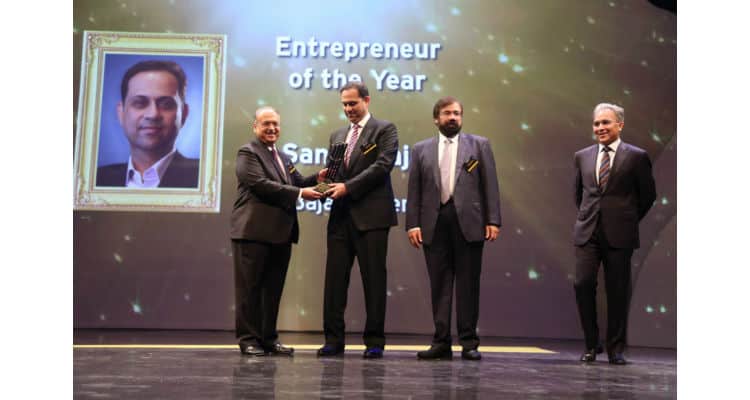 Sanjiv Bajaj, Managing Director, Bajaj Finserv, was named the EY Entrepreneur of the Year 2017. Bajaj Finserv has emerged to become the country’s leading name in financial services with solutions across lending, life and general insurance and wealth advisory.

EY also named nine other Category Winners for the Entrepreneur of the Year Program. The Awards were presented today at a Gala Award ceremony in Mumbai, in the presence of over 400business leaders and special invitees.

Sanjiv Bajaj will now represent India at the EY World Entrepreneur of the Year Award (WEOY) in Monte Carlo from 13-17 June 2018. EOY is the only global business award program in the world and is celebrated across 60 countries.

Dr E Sreedharan, widely acknowledged for his invaluable contributions transforming public transport in India, was honoured with the Lifetime Achievement Award. He was instrumental in the planning and execution of the Kolkata Metro, Delhi Metro, Kochi Metro and Lucknow Metro. He also spearheaded the Konkan Railway project, considered among the most difficult railway projects in the world, and completing it in a short span of eight years.

EY Entrepreneur of the Year 2017: Winners

Rajiv Memani, Chairman, EY India, says,“Entrepreneurs are fundamental to nation-building and it is their impact which the EOY program seeks to recognize. The winners this year comprise first-time entrepreneurs who are disrupting sectors with innovation or dominating new industries as also individuals from family enterprises, where despite being in conventional businesses, they have created massive differentiation with their aspirations, innovation and execution intensity.”

Being the only business award to be based on self-nomination, the Entrepreneur of the Year is now in its 19th year in India. Says Farokh Balsara, Partner and EOY India Program Leader,“Faster, better and more intense – that’s how the pace of disruptive change is advancing today. Our EOY 2017 India winners are entrepreneurs who have consistently used agile innovation to create profitable enterprises impacting industries, societies and individual lives.”

Founded and produced by EY, the 19th edition of Entrepreneur of the Year Awards were sponsored in India by Standard Chartered Bank and Dell.

EY, and BlackLine have announced the formation of a strategic alliance in India to offer…

Virtusa Corporation announced that its Chairman & CEO, Kris Canekeratne, is a winner of the…

In a conversation with DQ Channels Sonal Puri, CEO of Webscale Networks Shares her Journey…