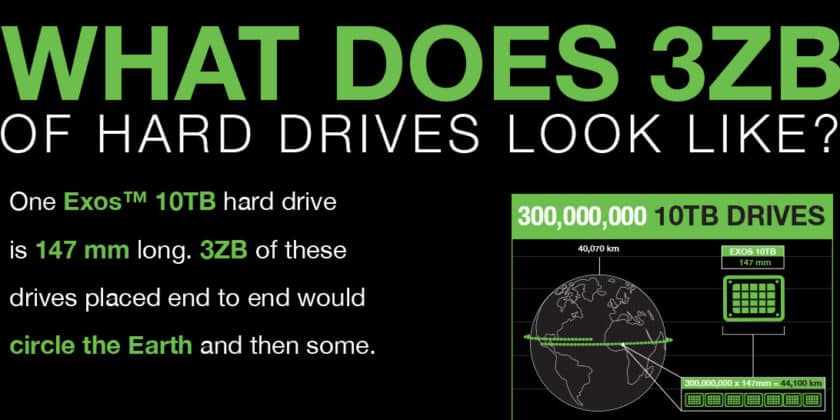 Seagate Technology has announced that it has shipped 3 zettabytes of hard drive storage capacity, surpassing that milestone in March 2021. It had previously taken Seagate 36 years to ship its first zettabyte in total.  It then took less than another four years to reach a total of two zettabytes shipped, and just over two more years to accomplish a total of three zettabytes shipped since the company’s founding.

More data is created in a single hour now than in an entire year just two decades ago. A self-driving car can produce up to 32 terabytes of data in a single day, per vehicle, and a smart city can generate 2.5 petabytes of data each day.

But at the same time, Seagate’s Rethink Data report found that, on average, only 32% of data available to enterprises is being put to work, while the remaining 68% goes un-leveraged.

It’s more critical than ever that storage devices and infrastructure keep up with the growth of data creation. Seagate is leading with innovations like Heat Assisted Magnetic Recording (HAMR) which will help it continue to increase the capacities of HDDs and enterprise storage systems long into the future.

Meanwhile, to capture the full potential of data at the zettabyte scale, Seagate is innovating with its open standards-based storage systems and software and Lyve edge-to-cloud mass storage platform to help enterprises overcome the cost and complexity of storing, moving, and activating data at scale. The company has shipped over three billion terabytes of data capacity till date.

Data growth is outstripping storage capacity and network bandwidth, yet competing in today’s data economy is predicated on storing, mobilising and analysing it at unprecedented volume and speed — all in an increasingly distributed IT ecosystem.

Data proliferation means huge opportunities, but also huge challenges not only with how we store it. Data represents knowledge — knowledge to improve processes, to increase profits, and to create a competitive market advantage.