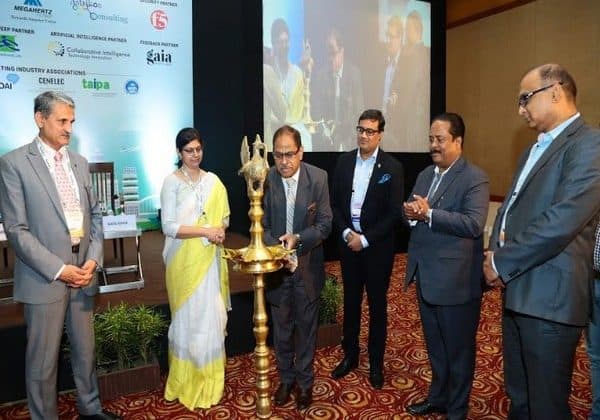 Security and interoperability of Smart Cities in India are the key components of the success of Government of India’s agenda of 100 Smart Cities.

The Smart City initiative by the Government of India is under various stages of development. According to various industry reports, by 2050, there will be a considerable population in India living in cities and two factors which are crucial for a sustainable smart city would be security and inter operatibility of various platforms.

While welcoming the delegates and attendees, Shashi Dharan, Managing Director, Bharat Exhibitions (organizer) to the Summit, he said that in the initial  stages, it is very important for the Master System Integrators (MSI) to not to change the Original Equipment Manufacturers, who were part of their initial tender process.

Responding to the MSI issue, A. Seshagiri Rao, Chairman & Managing, Telecommunications Consultants India Ltd said that MSI should take the responsibility of holding the umbrella and bring together all the departments and municipal authorities together, rather than working silos. “A holistic approach should be taken in building a smart city,”  A. Seshagiri Rao further added.

“We are building smart cities and we have to make sure that these cities continue to stay smart in the future. Currently, for each smart city, we are working in silos. This in itself is a challenge.

We need to share information between Smart Cities, we need to have inter-operatibility in place,” said Sushil Kumar, DDG (IoT) Telecommunication Engineering Centre (TEC). According to him, security is the biggest challenge which has to tackle on a priority basis.

In the European Union, there are over 50 platforms which are being used in various cities. While they all operate on different technology platforms. NSGI has identified the need for a reference architecture for bringing together of all platforms across EU’s smart cities, added Sushil Kumar.

“There is a need to have digital ranking index as a sort of competition between various smart cities in India to enable them to improve year on year in implementation of newer technologies,” said  Vikram Tiwathia, Deputy Director General, Cellular Operators Association of India (COAI) while responding to the moderator during a panel discussion.

During the discussion, it was pointed out that it is important to involve the citizens in developing a sustainable Smart City. The challenge is not only how to handle the data, but the volatility of the data. Accountability of processes is an important factor in the functioning of Smart Cities.

During the panel discussion on ‘emerging technologies, innovations, surveillance and development for smart cities’

Talking about the quantum of the data which is bound to be generated in a Smart City, Vineet Kshirsagar, Director for Government Business, NetApp Marketing & Services Pvt Ltd said: “With the combination of technology, people & data there is bound to be a disruption. Data is critical for effective function of smart cities.

The amount of data which is received from various sources and how this data is used for productivity, efficiency & operations in the smart cities is critical”.

According to Teevra Bose, Founder & Executive Chairman, Athenta Technologies while laying stress on the concept of creating a Enterprise Smart Bus said that the citizens who get into the smart city would be looking at a seamless integration of all their basic amenities fulfillment with added features of secure & safe environment and effective solid waste management.

“The municipal authorities must stress on the ability to integrate different types of data originating from heterogeneous equipment including voice, video, data sensors,” said Teevra Bose.

The 5th National Summit on 100 Smart Cities, India 2019 was organized by Bharat Exhibitions.

Posted by: DQC Bureau
View more posts
Security and inter operability are key to the success of Smart Cities in India 0 out of 5 based on 0 ratings. 0 user reviews.
HPE builds supercomputer to support future human mission to moon
Aruba, a HPE company inks MoU with Banaras Hindu University

Digital Wellness Should be a New Years’ Resolution for Companies

When it comes to growing a successful company, research shows it isn’t about getting the…

The findings included in a new report from Forbes Insights and Vertiv. “The Modern Data…