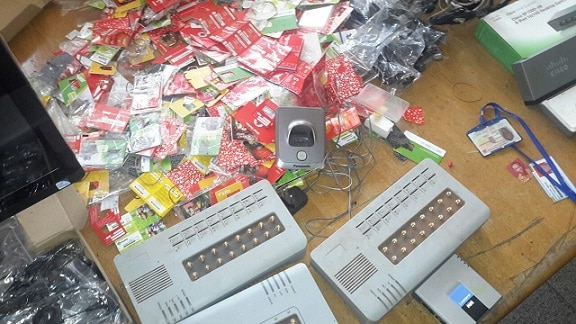 The arrest of 11 people from across three districts by the Madhya Pradesh ATS has exposed a new genre of crime called SIM box fraud that has become a menace for the telecom industry across the globe. This is also known as Simboxing, Bypass fraud GSM gateway fraud- the ghost taking away money from mobile operators’ voice revenue.

MPATS officials say that this fraud not only costs crores to telecom operators and the government, but even makes a country at risk to security threats like counter intelligence and espionage.

It is being alleged that the Pakistani handlers were using this syndicate to derive information about ordinance depot in the state, as told by the officers.

The accused had bought it online from China, said and officer that this machine is available for rates varying from Rs 40000 to Rs 1 lakhs depending on the number of ports.

The MP gang in Simbox fraud is linked with 11 people who were running a similar exchange in Uttar Pradesh and were arrested by the UPATS. Gulshan Sain a resident of Delhi’s Mehrauli who was arrested by UPATS last month is said to be a common link between gangs of the two states. Modus operandi was same.

According to Lucknow bureau, UPATS had acted on an input provided by the Jammu and Kashmir Military Intelligence unit two months back, and was asked to probe two dozen internet call logs.

Sleuths posted at the Jammu and Kashmir military intelligence unit realized something was wrong and tried contacting the numbers which had flashed on the screen of the targeted Army personnel. But they couldn’t get through. The Army then asked UP ATS to probe the case. While analyzing the case further, it was noticed that targeted personnel received illegal VoIP traffic on their mobile phones, which is against rules laid down by department of telecommunications. As genuine numbers of different Army units were spoofed, the ATS took up the case on priority, sensing an elaborate spying ring.

The ATS got in touch with Telecom Enforcement Resource and Monitoring Cell, the technical arm of the department of telecommunications which acts as interface between security agencies and telecom service providers.