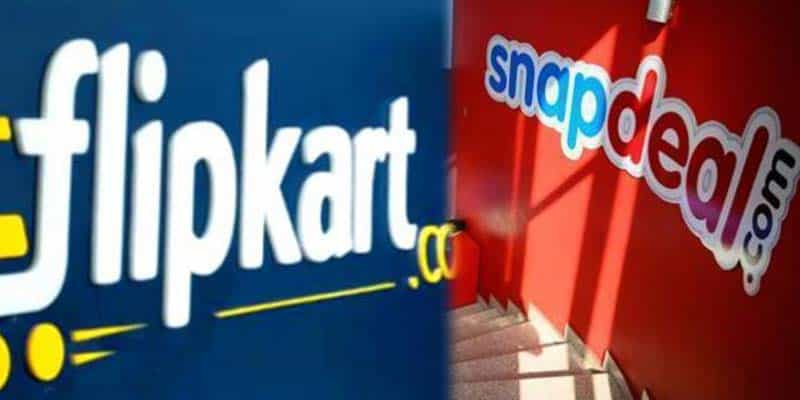 Japanese giant SoftBank is orchestrating a possible merger between the struggling Snapdeal and its bigger rival, Flipkart , according to people close to the development.

The deal, if it materialises, could bring about the most significant consolidation in the cashguzzling domestic e-commerce market.

SoftBank is likely to invest up to $1.5 billion in the merged entity by picking up primary and secondary shares, giving it around 15% in the Flipkart-Snapdeal combine. With a little over 30%, SoftBank is the largest investor in Snapdeal, which was valued at $6.5 billion in early 2016.

The deal may include a $1 billion share sale by Flip kart’s largest investor, New York-based Tiger Global, along with an infusion of fresh equity by SoftBank, people in the know said. Tiger Global is expected to sell 10% of its ap proximately 30% stake in Flipkart. If this secondary deal goes through, it would probably ensure that Tiger recoups the entire capital it has ploughed into Flipkart, and still leave it with a stake of about 20% in the company.

SoftBank is learnt to have drawn up three options for Snapdeal -merge with Flipkart, combine with Alibaba-led Paytm , or a writedown of SoftBank’s investment to zero.

“SoftBank and Flipkart have agreed on the broad contours of the deal. If these terms stay on track, it’s likely that the talks will culminate into a definitive transaction by late April,” a person familiar with the talks said. The discussions, which have been on since February, have picked up in the past fortnight with SoftBank founder Masayoshi Son getting directly involved.

Domestic players like Flipkart are duking it out with Amazon, which has readied a multi-billion dollar war chest for the country, while China’s Alibaba has put its weight behind Paytm’s e-commerce business.The Bengaluru-based Flipkart is being valued at $10-11 billion in its latest financing round, which may raise up to $2.5 billion if the SoftBank transaction goes through, sources said. In 2015, when it last raised capital, Flipkart’s valuation stood at $15.2 billion.

While Flipkart has yet to make its fund-raise official, sources said $900 million of fresh capital has already come in, of which $700 million is from Chinese internet group Tencent while $200 million has been pumped in by Microsoft. The news of Flipkart’s fundraise has dribbled out through multiple media reports in the last few months.

Tiger Global and Snapdeal did not comment on the ongoing deal talks while a Flipkart spokesperson said, “Your information is false and baseless.” SoftBank said it does not comment on speculation.

SoftBank may route investments in Flipkart through the Vision Fund, a $100-billion investment vehicle that counts several Middle East sovereigns and technology giants like Apple as sponsors. Sources said SoftBank and Masa will need to convince Vision Fund’s sponsors about the efficacy of pouring money into Flipkart in a bid to salvage the group’s investment in Snapdeal. “They will have to persuade the Saudis and other investors that this is not a case of throwing good money after bad money , but they should be able to do so,” said a source.

SoftBank’s arrival would provide Flipkart with a strong anchor investor to battle Amazon on an equal footing and prepare the online retailer for an initial public offering in the next three years.

The final SoftBank investment could be anywhere between $1.2 and $1.5 billion, depending on Flipkart’s appetite for new capital, sources said. “Flipkart is not keen on taking more than $1 billion in new funds as it would tantamount to heavy dilution. That leaves SoftBank with the option of picking up secondary shares from Tiger to increase its ownership in the combined entity,” another person privy to the developments said.

Tiger’s partial secondary sale to SoftBank will come as a relief for its now legendary fund manager Lee Fixel, who placed a prodigious bet to build about 30% ownership in Flipkart, and has been closely involved with the e-tailer’s fortunes.

Tiger’s share sale, if it goes through, will be the largest liquidity event for any risk investor in the domestic consumer internet economy , which saw heightened activity and was flush with funds over the past few years.

Tiger, which holds significant positions in Ola, ShopClues, and Quikr, among other companies, has kept away from taking any fresh wagers in Indian tech since end-2015, a fallout of its colossal exposure to Flipkart.

The deal will also signal that tech billionaire Son is reposing faith in the country’s internet unicorns (a term used for tech startups valued at a billion dollars or more), at a time when investor sentiments around tech startups are predominantly lacklustre.

SoftBank has invested around $800 million in Snapdeal (at a median valuation of around $2 billion), which has been gasping for fresh capital in the midst of a slowing business.

SoftBank’s fresh bet and Tiger recouping its investment in Flipkart will reinvigorate investor interest in the long-term potential of the Indian internet ecosystem, as domestic players fight out the massive war chests of global giants like Amazon. In a management reorganisation starting last year, both the Flipkart founders, Sachin and Binny Bansal, who are not related, stepped out of operational roles at the e-commerce firm.

Tiger’s association with Flipkart has become legendary in the India internet ecosystem because of the kind of influence the fund has had on online retailer. That got further boost in January this year when Kalyan Krishnamurthy, an ex-MD at the fund, took over as CEO of Flipkart, with the objective of turning around the company .