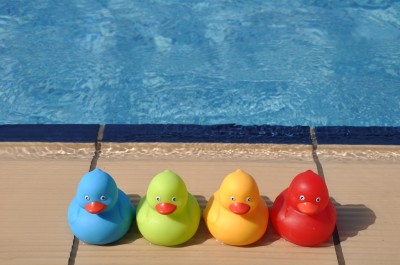 As impossible and unpalatable as it sounds, it so happens that bathing was not commonplace back in the Medieval Ages. There were public bathrooms but a certain section of society and clergy looked down upon them with fear and frown.

Diseases were supposed to pass more quickly in such places when people shared bathing spaces. Bathing or water, per se, was not considered a healthy affair either as it was perceived to open the skin pores and make infections travel faster and farther. Forget some kings and queens who, as historians noted, never bathed more than twice or thrice in their lives – even the common man and woman took refuge in satchels of herbs, scented bags, and smelling salts to save themselves from the stench of a bathing-averse culture.

Yet today, we have huge swimming pools where people congregate without being paranoid about health or morals. We have stores making fortunes out of selling every possible accessory and flavor for the bathing enthusiast. We have gym rooms. But we have Jacuzzis too.

People do not worry about catching infections from the mere act of bathing but they did once. People do not fear for immune systems of their data with public clouds but they did once. Not only that – Spending on expensive faucets for private powder rooms is as familiar today as is building private clouds, if one swings that way.

Bathing, like Cloud, is no more a strange concept – it’s routine, standard, in fact, an imperative now. Life has become inconceivable without a soap and an A-A-S tap.

While we don’t have time or inclination to dig deeper into the mores of bathing, we certainly are ready to see Tiny Haynes, Research Director, Gartner scrub away some doubts and what-next’s about the Cloud’s metamorphosis?

Like what new contours is the Cloud-strewn skyline going to mark for the industry; the interesting tussle between Private-Public Cloud, between various Cloud biggies and niche-ies, the presence of AI on the fringes of these rings, and the slippery floors of data sovereignty and FaaS in this conversation with Haynes here.

So we are definitely past the phase of skepticism and unbridled excitement around Cloud. What has changed then in the last few years?

For one, we have seen how some specific needs of certain industries have been met by Cloud setting a trail to follow for the less-innovative ones. Now the next chunk of adopters would be those from the conservative or highly-regulated segments. They have started to move into Cloud, and not just for IaaS (Infrastructure as a Service) but also in SaaS (Software as a Service).

It’ a long process because people are used to doing things a certain way and may be not sure of dealing with uncertainty and third-party spaces. The ability to be agile is, however, now more pronounced and well-noticed. Buying a car vs. renting one is a question that is applicable on many areas of business too. It boils down to the pros and cons of ownership as well as specific needs. Ultimately it’s about what you want to actually pay for.

Does that mean that doubts around data sovereignty and security have been sufficiently addressed? Are such issues still working as deterrents? Is it right that security questions around Public Cloud have ironically changed into the answers they provide better than private clouds?

There have been many lessons on this path. We have seen changes happen in regions like Europe when capabilities got anchored in Sweden, London, Paris, Germany etc. Players have definitely realised how significant local infrastructure can be. Data sovereignty is certainly a strong driver and it’s a long way to go but some players have begun to work on the fortunate position to consolidate with this factor in mind. But yes, players need to step up in more geographies to ensure a good position on this parameter.

Security is a risk-gain trade-off about sharing. Over time, people realise that doing something yourself can be less secure. Behemoths like AWS have the ability to be better positioned; they get security certifications, have the requisite expertise, and adequate platform robustness. The more regulated an industry is, the less risks it can accommodate. So, it’s about risk-agility trade-off there. It matters what kind of culture shift or regulator dominance is in play.

Lately, we have been hearing about Private Cloud being re-invented. Are remotely-managed Clouds really something to reckon with? Or is it just another new label?

Organisations need to ask themselves some fundamental questions about their real needs. There is a slowdown in consumption of data centres. There are migration costs. But it’s like electricity. Do you want to use it as a service or would you want to have it as your own grid (like a hospital)? It’s going to be a mix-and-match scenario. I don’t see remote Cloud as a long-term move.

What has changed about the Private Cloud-Public Cloud debate?

You can’t be your own Amazon. Not everyone. They have a typical 3rd-party scale advantage. For certain apps and needs, Public Clouds may not be right. For Private Clouds, a host of definitions keep doing the rounds. It’s about what it actually is vs. what people think it is. Is it virtualisation or orchestration? Sometimes, they still have to pay enormous amounts for hardware prices. Constraints, hence, stay with Private Clouds.

They cannot innovate as fast as Public ones. It’s not just about agility but also about innovation and some things are better in Public Clouds. It’s what an organisation eventually needs that should help one decide between the two choices.

Is the industry fighting it out on the right plank with discounts and price-wars?

It’s more like one company innovates and others follow with discounts. Innovation is going to be more and more important. AWS has a huge installed base in the start-up and dotcom base. Microsoft came later but went good on PaaS and product suites leveraging its enterprise foothold well. They are well-entrenched on corporate strategy segment whereas Google has evolved slowly but is strong on analytics. Each player has its own strength and geography.

By 2019, 90 per cent of native cloud IaaS providers might be edged out by the AWS-Microsoft duopoly even as the likes of Aliyun and Alibaba are around. Would the frenemies align differently with changes like IBM-Verizon one?

We will see a marketplace that is different from the early days. We have seen Rackspace as the major name, then AWS and Microsoft grew and a lot of people gradually left the market. There would be new entrants with credible skills and scale. Big players will continue ruling while niche ones will come and go unless they have a distinct need or geography grip.

And AI would be a defining factor as we move forward?

Absolutely. There have been so many solutions and so much innovation is happening here. AI is definitely going to be useful.

Then what should be the three questions that a user should ask when investing in Cloud?

First of all, and very frankly – Why Cloud at all? Then, what’s the gain in it for me in terms of strategy? How’s it going to change the business? But then, also make sure what security or governance, RTO (Recovery Time Objectives), compliance, data breach factors are important enough for this decision.

Posted by: DQC Bureau
View more posts
Tags:AWS-Microsoft, cloud, FaaS, Gartner, Private-Public Cloud
Some use Deo. Some use Talc. Some use the Cloud 0 out of 5 based on 0 ratings. 0 user reviews.
This app will assist Police for criminal database
Qualcomm to pay BlackBerry $940mn to settle royalties dispute

From remote working to online events, Cloud is giving stability and flexibility to the next…