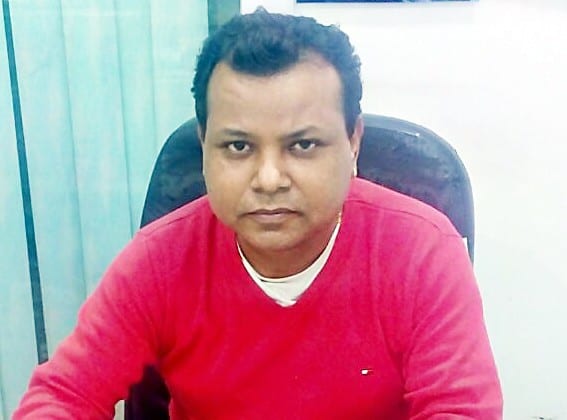 A studious and sporty boy from small town of Ranchi, capital of Jharkhand, is making his mark in Jamshedpur. Being a 1st generation businessman in family, Amitabh S Vidyarthy faced many challenges and hardships in his path, but his dedication and hard work proves what he is today.

Here are a few lessons for success that we can learn from Vidyarthy’s journey.

Those were the Golden Days

Growing up in Ranchi, will always be good old days to him, he was a brilliant science student, participated in co-curricular activities and won numerous prizes. After doing graduation in Science, Amitabh moved to Patna to do MBA in Sales & Marketing from LN Mishra Institute. These two years transformed him into an entirely new personality. There he learnt how to cope with life when one is all alone though independent.

During his summer training in Delhi, he was offered the job of Executive, Sales in tool manufacturing Company once he would complete MBA. He worked there for couple of months left due to some personal reasons.

He moved back to his hometown and joined another company, soon his hard work pays off and he was sent to Jamshedpur with a promotion. Being helm of the affair of every activity he soon realise that it is time to do something different.

And then there were four

In the year 1997-98, four young Professionals put-in their papers from their lucrative jobs in the corresponding Companies and started their own venture with just a meagre sum of 50,000/- as working capital. Amitabh along with Prakash Jain, Prasenjit Chowdhury & Alok Agrawal started with the trading of only Cabinets and Consumables under name of Origin Infotech with very competent visionary and enough fire in the belly, using Kolkata as procurement hub and Ranchi and Jamshedpur as the Trading Market.

In the course of time, they transformed the business in a giant like Origin Group of Companies with 7 Branches, 4 Retail Stores, 100+ Staff Stregth, 10+ Highest selling brands in Product Portfolio, more than 150 Channel Partners and whooping installation base of not less than 50,000 across eastern region. Now they are one of the biggest Distribution and Retail House in Eastern India.

Today Vidyarthy is IT association President and he believes, “Every day We achieve something and we have to keep going. Every day has its own challenges, so completion of a successful day is itself a big achievement. In Business arena We cannot pin point single achievement or few achievements.”

Amitabh’s believes in proverb “THERE IS NO MAGIC EXCEPT HARDWORK ”. It is said that if you do not find any speed-breaker or hiccup during your journey, you are on the wrong path. Amitabh belongs to a working class family, so When he first put in the papers and started business, maximum resistance he received was from his own parents. He managed to convinced them with his capabilities and conviction. Being a 1st Generation businessman in family, he had no idea how and where this business would go. The biggest problem were the lack financial resources, credibility in the market, absence of defined database.

When he started business, he struggled quite a lot, whether it is phone charges, lack of space, everything was in tits and bits, he used to collect materials from courier service and deliver the materials to every location on a scooter. Sometimes he delivered material on shoulder at the 2nd or 3rd floor of the building without lift. He took it as examination for the Best of Result, but never lost his nerves.

Disciplined Life, Focussed Goal and Commitment & Honesty, these are the factors that he had incorporated in his life and they gave him positive and desired result.

Top is the priority

It’s easy to visualize but equally difficult to get there. “We wish To be the top ranking Distribution House in Eastern India with equally emphatic presence in Retail Business in next 2-3 years of time span, and being most preferred procurement point for at least 500 Channel Partners. To establish us as a benchmark for being one of the most reliable Organization to our claimants and associates be it the Principal, the Bank, the Staff, the Channel Partners or the End Client.”

At different stage and age Amitabh was influenced with different personalities. “During my childhood I was extremely impressed with my father who is a versatile personality. Then during my academic days I was very much influenced with few of my Teachers/ Professors but professionally I admire Ratan Tata from the core of my heart.

“It is to cope with the ever changing technologies, business dynamics, unethical business practice specifically predatory pricing on OLS. We have already been passing through a recessionary economical phase which is giving us a hard run for our money. Being President of our Jamshedpur IT Association I keep on finding ways by organizing seminars, movements to curb this situation.”

“I am a simple family person and whatever I do, I do it by keeping my family and my Business Partners (my other family) in mind. My father (now retired), younger brother’s family reside in Ranchi .

I shifted to Jamshdepur in late 90s, and started my business here. I live here with my pretty wife and two sons who are greatest strength of my life no matter it is good or bad.”

Vidyarthy loves singing and worship Md. Rafi, “I have been given so many stage performances since my College days and I still do. I won a couple of Singing Reality Show at Jamshedpur Level and a prominent member of Amateur Artist Association. I feel if I would not be a Businessman I would have been a Singer.” He also likes to travel and reading books.

Vidyarthy believes “success has its own process, if your inputs are right nothing can deprive you from getting the same. I still work 6 & ½ days a week with the same passion as if starting the new business. So work hard…….there is no short cut.”

“Move Consistently Towards your Goal”-The Success Story Of Basant Mehta

BlueBell Computers recently celebrated their silver jubilee anniversary. From the past 25 years, they have…