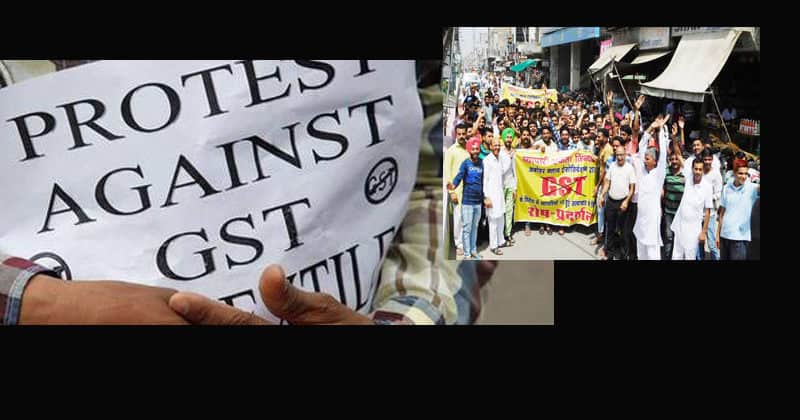 About 8 Crore traders have called for an all-India trade strike on the 26th of Feb against irregular rules in the GST law. CAIT and the All India Transport Welfare Association have come together to call for this strike. In Nagpur, a three-day national business conference has been organised by CAT, which began today and has been jointly attended by more than 200 prominent business leaders from all the states of the country.

The call was made by the National President of CAIT BC Bhartiya and National Gen Sec Praveen Khandewal. They both said that the GST’s basic form has been distorted by the GST Council for their own benefits and that GST is a completely failed tax system. They also said that the state governments are not concerned about rectifying the laws and simplifying the taxation. They further said that instead of doing business, the traders of the country spend all day in the GST tax cradle, which is going against the country’s economy. In such a situation, the present form of GST needs to be rectified.

The two leaders highlighted the fact that GST infrastructure has changed after GST has been revised more than 937 times in four years. Despite repeated calls, the GST Council has not taken any cognisance of the issues raised by CAIT so far, so traders have announced an All India bandh to convey their points to the people across the country.

Comments by the IT Channel Partners

The IT channel partners expressed their views to DQ Channels in a separate conversation. Puneet Singhal, President, CMDA said that his organisation fully supports the call for strike against the present form of GST. He further said that this law is there only to harass the traders. First, the buyer of goods can’t tell the seller that the seller should file his return. Second, if the buyer files return every month and the seller files it every quarterly, then this mismatch will be because of the rules and the seller won’t be responsible. He demanded that there should be common date for filing return for all traders registered as dealers, whether it is monthly or quarterly, so that the mismatch doesn’t happen. Next, when the buyer has given the tax to the seller and now the seller has to show it in his return, then the buyer should not be held for non-payment of tax. He said that the buyer should not have to pay the same tax twice for the fault of the seller and the CMDA opposes this.

Pankaj Shah, Ex-President, ASIRT concurred with Puneet Singhal that there should be a single filing period for both buyer and seller, either monthly or quarterly.

Navin Gupta from JCDA, Jammu also supported the cause of CAIT and its call for strike to reform the GST. CP Praveen, Managing Partner, Vasavi Computer Academy, Vellore said that there should be same date for filing GST for all, there should be one class of regular traders, no composite categories. R Sridhar,  Triangle Technologies, Bangalore said that our taxation is like pulling out a plant from its roots. Azad Chauhan, Director, TC Infotech said here all the struggle is done by the plant to stay alive.

In the evolving development of this issue, the CAIT has welcomed the Budget proposal of increasing 2% tax on the MNCs and E-commerce companies such as Amazon, Flipkart, Microsoft, Google, Zoom etc. This tax is liable to be paid by these companies on services as well as products.

CAIT had been asking the government to tighten the ropes on the E-commerce companies for many months and hence, it welcomes this response from the Finance Minister Nirmala Sitharaman and the Finance Ministry in this regard.

This rule shall be applied from 1st April 2020 last year. More such changes are likely to happen in the near future. CAIT says that it will advise the government about advertising the new levy rules on various platforms, as many traders are doing their business online but they are not properly aware of the rules.

In a recently circulated notice, CAIT further says that it will be very difficult for the traders to do business because of the fast changing rules of GST. They may have to face harassment and corruption from the GST officials. The GST number of any traders can be cancelled anytime. For minor errors, along with fine now they may have to undergo punishment as well. Their Input credits can be stopped. CAIT has promised to circulate another note in this regard soon, which it desires the members to circulate among their networks. CAIT feels that this is the time to raise voice against the illogical GST rules and also against other problems that the traders are facing. Hence, CAIT has reiterated its call for an all India strike on 26th of Feb.

Puneet Singhal has informed the channel community that on 20th January, the GST officials in Gujarat harassed and physically assaulted the traders in Gujarat. CAIT has taken a strict view on this incident and has written to the Finance Minister Nirmala Sitharaman and the Gujarat State Finance Minister Vijat Rupani and has demanded to investigate this matter and to severely punish the offenders of this incident. CAIT has highlighted that the traders are respected and hard working citizens of this country and work hard to collect the GST for the government. If the Gujarat High Court had not taken cognizance of this issue, it wouldn’t have come to the notice of the people of this country. These incidents are taking place because of unlimited powers granted to the GST officials, who are now acting in a dictatorial fashion.

Gujarat High Court had summoned the GST officials to present their case through a video conference on 10th of Feb. Several traders in Gujarat had been taken into custody and were forced to pay crores of rupees before getting released.

CAIT opposes physical assault and mental harassment against any rules. On 15th February, CAIT and AITWA representatives is meeting M Ajitkumar, the Chairperson of the Indirect Taxes Board and other senior officials of the GST department to discuss all matters related to GST.

There is a lot of anger amongst the traders regarding GST rules and the government needs to resolve this problem immediately.