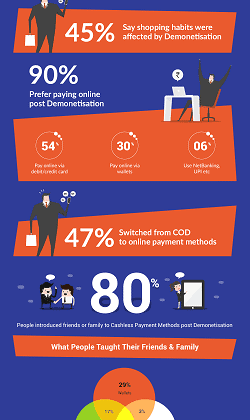 It has been a year since the Government of India implemented the most extreme measure to curb corruption and black money. On November 8, 2016, Prime Minister Narendra Modi announced that all Rs 500 and Rs 1000 notes would be invalid after midnight. This phenomenon that is popularly known as Demonetisation has had many impacts.

Among those who now prefer paying online, 54% pay via debit/credit cards, 30% pay via wallets like Paytm, Freecharge, MobiKwik etc., and 6% use NetBanking and UPI. Interestingly, 80% of the respondents claimed that they have introduced either their family or friends to cashless payments post-Demonetisation. Most respondents introduced shoppers to wallet based payment. The ease of use and instant money transfers facilitated by mobile wallets has made them a popular mode of payment.

Overall the impact of Demonetisation on online shopping has been positive as more and more people have chosen cashless payments modes. This has helped many brands in establishing customer faith.

Posted by: DQC Bureau
View more posts
Tags:CashKaro.com, demonetisation, Government of India.
A Year After Demonetisation: Impact Analysis 0 out of 5 based on 0 ratings. 0 user reviews.
Ark Infosolutions Hosts “V-Ray Days” In Partnership With Chaos Group
‘We have the largest partner ecosystem in the IT world’- Microsoft

The most anticipated e-commerce sales of 2017 are here and CashKaro.com has key industry insights.…

Digital payments up by 55% after demonetisation: NITI Aayog

After the government announced the demonetisation of high value currency, there has been a significant…